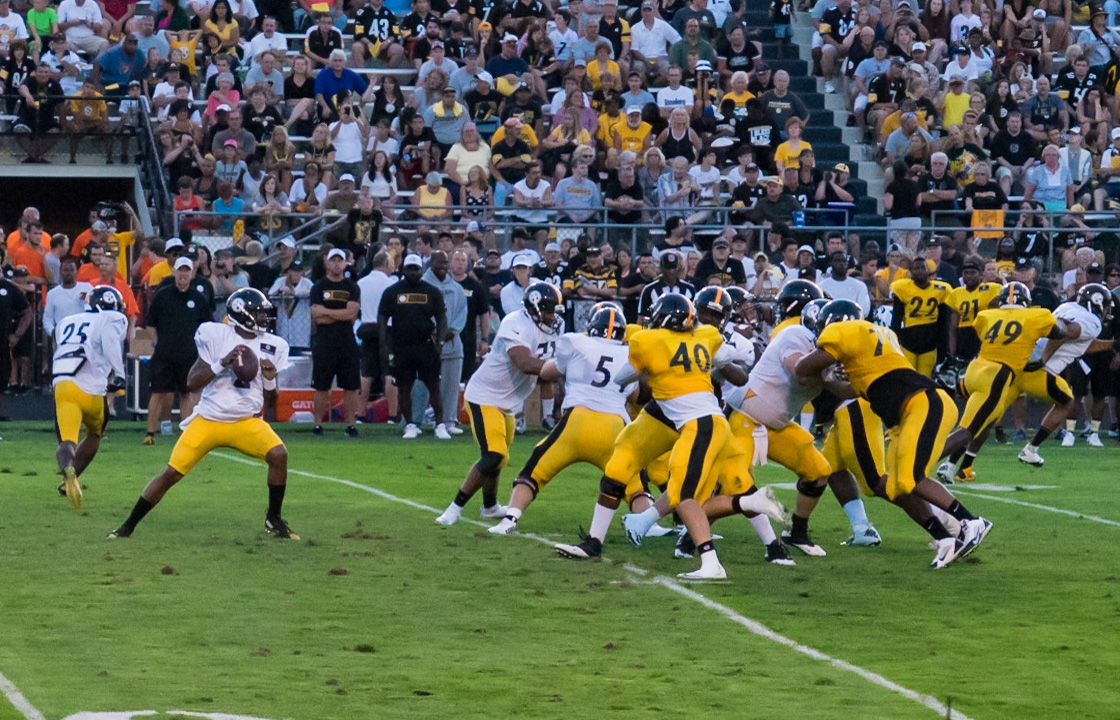 I have to admit it. I am surprised at how much Cover 2 the Pittsburgh Steelers have run. I originally chalked it up to a buzzword more than anything but the tape doesn’t lie. It’s been a prevalent part of Keith Butler’s defense.

Last week, we covered the MIKE rules in a Tampa 2 – get depth as essentially the middle third defender in the two high shell. There are a lot of pros to that and we’re not here to debate the pros/cons of the overall scheme. But like any defense, there are inherently drawbacks, and I saw an instance of that in yesterday’s game against the Jacksonville Jaguars.

As a refresher, the first goal for any linebacker is to read your run/pass keys. Identify high (pass) or low (run) hat of the lineman. And in a Tampa 2, the  MIKE linebacker’s duty is getting 15-20 yards of depth. Carry the Y down the seam should there be a vertical threat.

Here’s the situation. 1st and 10 for the Jaguards midway through the first quarter. Steelers are in their Tampa 2 defense. Sean Spence is considered the MIKE linebacker, responsible for getting depth and being the middle third defender. Again, on the snap, every linebacker reads his run/pass keys. It’s a high-hat read, the linebackers showing pass. So Spence naturally gets depth, opening his hips to the passing strength. 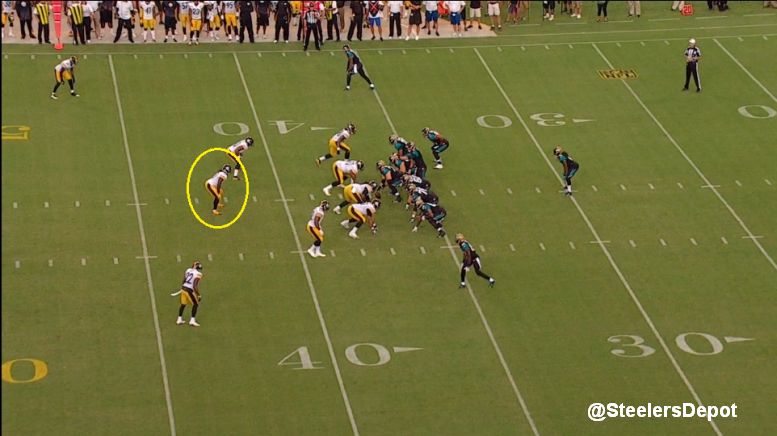 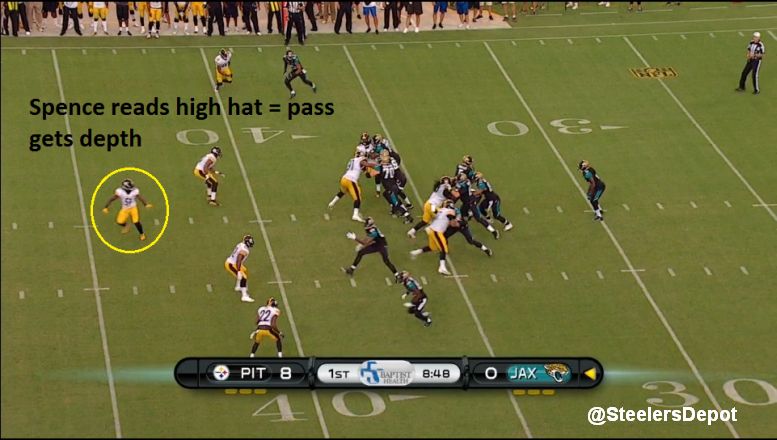 He winds up getting about five yards of depth before he realizes it’s a draw. And he’s already out of position, no one to fill the playside A gap to defend it. Couple with the defense’s over front, the running back hits the second level untouched. 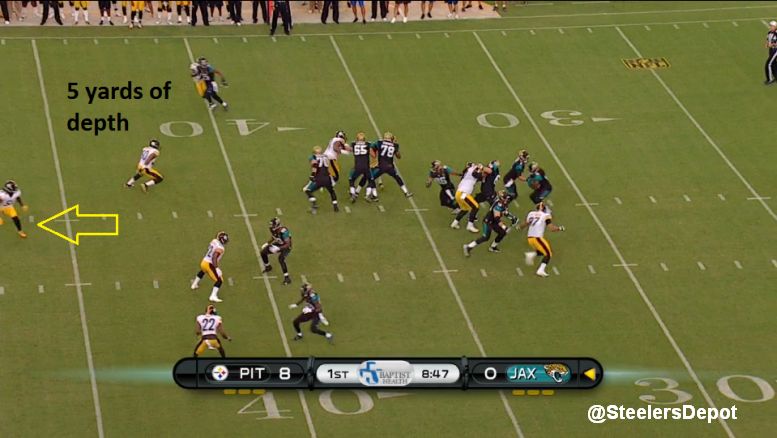 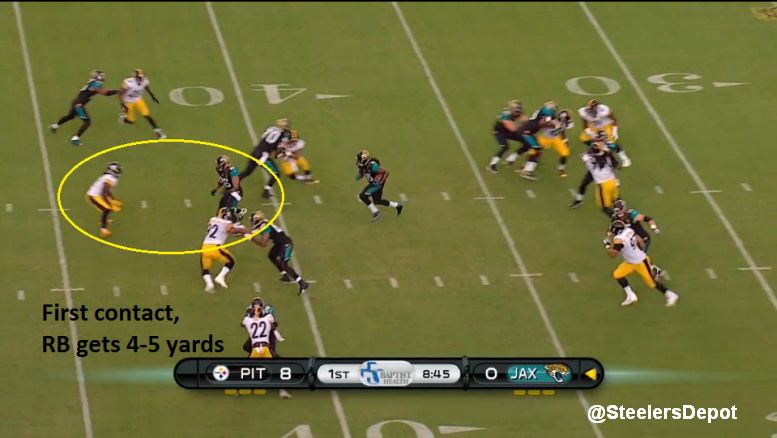 Spence doesn’t even make contact with the blocker until the back has already sprinted 4-5 yards upfield. To the linebacker’s credit, he sheds the block and makes the tackle. But it illustrates the problem. Spence does nothing wrong here. He does his job. But there is that risk when you ask the linebacker to bail the way he does.

The biggest issue I had with him last year was with his first step. He did have trouble reading his keys and would put himself out of position. That doesn’t happen on the play above but it happened later in the game.

Early in the second, the pre-snap alignment shown below. 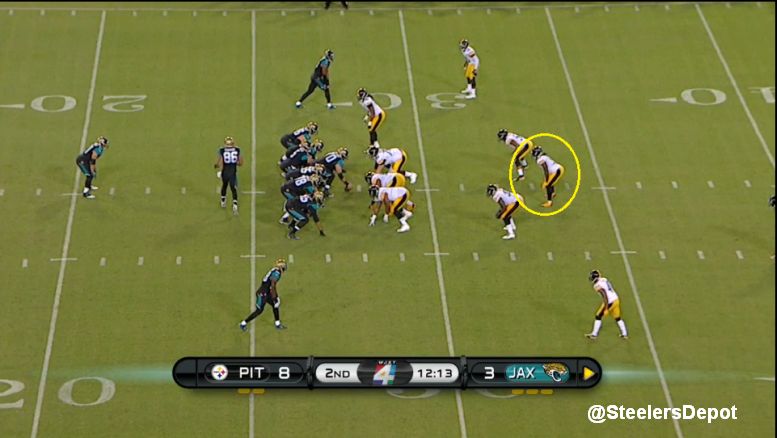 The Jaguars’ lineman show “low hat,” indicating run. But Spence isn’t reading it, the only player to get depth off the snap. 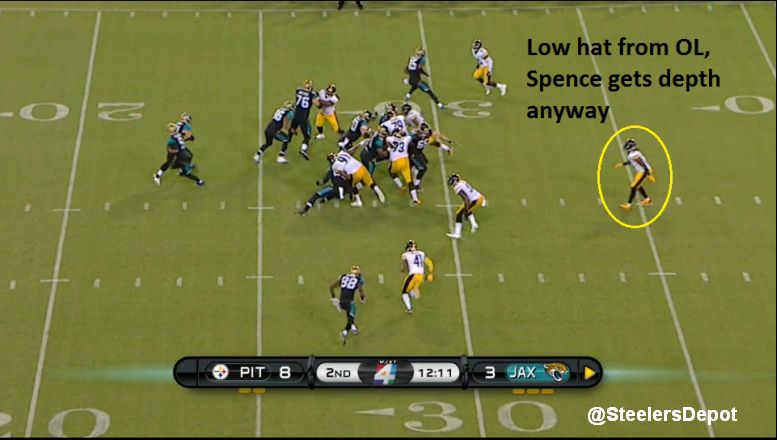 He struggles to get back into the play, an easy target for the lineman’s second level block, nearly taking him out of the frame. 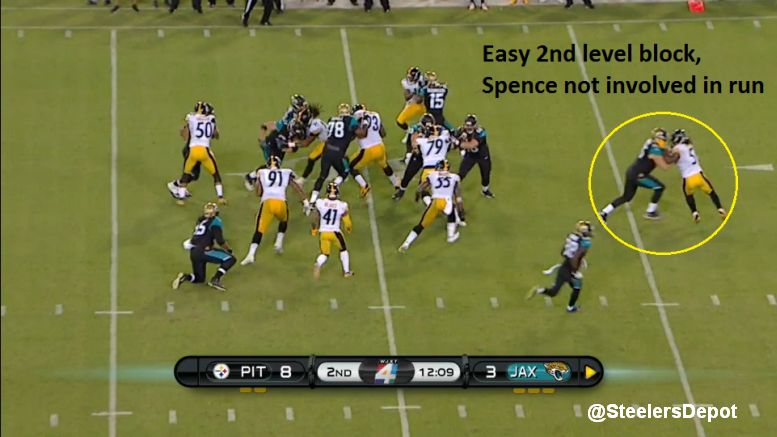 That is, obviously, a separate issue from the Tampa 2, but worth bringing up since we’re on the topic of Spence.

Being in right position is half the battle. Whether it’s an issue schematically or with individual technique, they’re great ways to get gashed against the run. And don’t be surprised to see some offenses pick up big yards on draws in 2015.