We’ve already looked at the incomplete throws that Pittsburgh Steelers backup quarterback Landry Jones had in the first half of Sunday night’s preseason opener against the Minnesota Vikings and now we will look at the throws he failed to connect on during the second half.

Jones’ first incompletion of the second half was intended for running back Dri Archer, who had released out of the backfield. Now, we’ll get a better look at this play on the all-22, but it does look like Archer slows up just a tad coming out of his break. Below the gif is a still-shot of the pass, which is just out of reach of Archer. The running back was wide open, however, and thus you would expect this to be an easy pitch and catch. 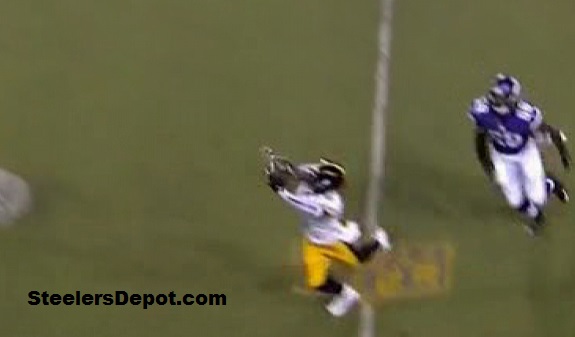 This pass to Shakim Phillips on a comeback route might very well have been completed had Vikings cornerback Trae Waynes not held the Steelers wide receiver. 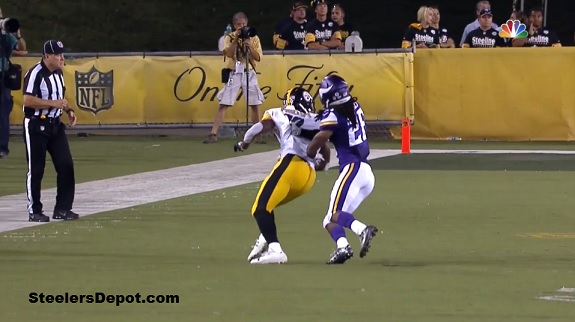 Pressure on Jones up the middle forced the Steelers quarterback to get rid of the football early on this play and it resulted in an overthrow of Archer.

Jones doesn’t even give Phillips a chance on this 1st and 10 throw in the fourth quarter. The quarterback had plenty of time here and threw it at the feet of Phillips.

On this deep throw to Phillips down the left side, the wide receiver is called for pass interference. I can’t wait to see the all-22 of this play so I can see exactly what Jones saw as it looks like he had tight end Will Johnson wide open down the seam. It looks like Jones’ mind was made up pre-snap to go to Phillips.

Jones has plenty of time on this play and he overthrows Phillips.

Incomplete on the curl route to Phillips on this play but Vikings cornerback Jalil Carter is flagged for holding the Steelers wide receiver.

This next pass is clearly thrown behind tight end Jesse James.

Another throw off target and this one was intended for Phillips.

This little flip from Jones while trying to escape pressure was his final incompletion of the game.

It certainly was a tale of two halves for Jones Sunday night against the Vikings. I thought he played well overall in the first half even though it doesn’t necessarily show up in the gamebook. In the second half, however, Jones missed a few throws he’d probably like to have back.