Much has been made in recent weeks about Pittsburgh Steelers defensive coordinator Keith Butler’s heavy emphasis on running a Cover 2 defense, and with good reason, as the team has clearly been working on the scheme in practice and in preseason games. Friday night revealed that the Steelers safeties still have plenty of work to do before they can be successful as key components to a Cover 2 defense.

I’ll start with an example from early in the game just to clearly demonstrate to you what a Cover 2 cornerback’s responsibilities are.Jacksonville Jaguars’ first possession and first pass of the game is a play-action rollout with Julius Thomas coming across the formation to the shallow flat area. The wide receiver on that side is running a clearing route to draw the corner, in this case William Gay, deep so that Blake Bortles has an easy completion to the flat. If Gay sits underneath, Bortles can hit the vertical option over his head. 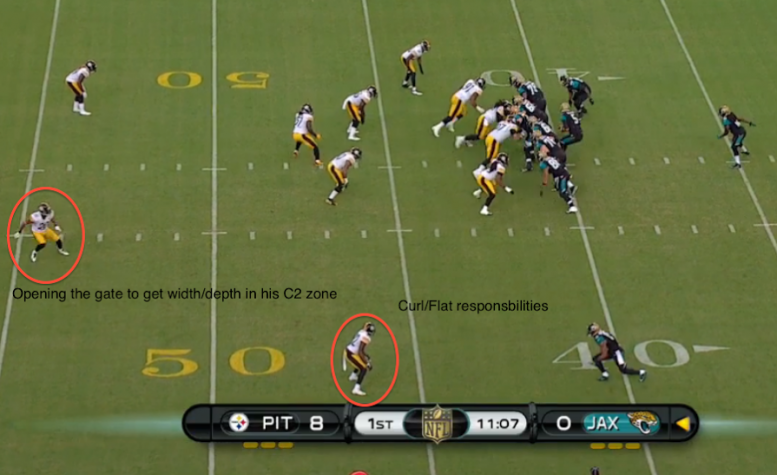 Gay’s job here is to funnel anything vertical to the safety Will Allen, while sinking with his eyes on the quarterback to prevent Bortles from dropping an easy pass over his head to the receiver before Allen is in position to make a play on the ball. Gay then works high-to-low, driving on any curl/flat throw to the zone in front of him.

This is an easy read for Allen, as the Jaguars 13 personnel and play-action fake basically eliminate any vertical threats to his deep half of the field outside of the lone receiver. Allen can immediately get depth and width in his zone and lock his eyes to #1, which he does immediately here. 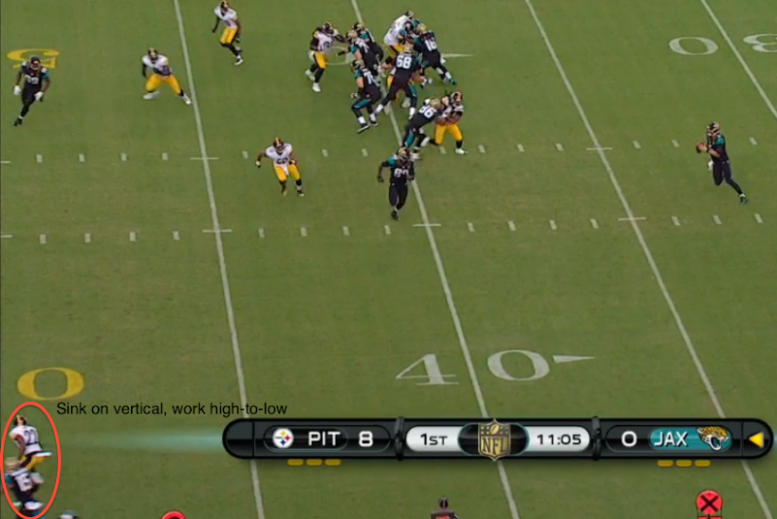 You can see Gay sinking on the vertical route to take away the deeper option from Bortles, yet still keeping his eyes on the quarterback so that he can drive back to the flat area if the pass goes underneath. With only one real option, Bortles has to dump the ball in the flat to Thomas and Gay closes quickly for a superb tackle to hold the gain to just two yards on 2nd down.

Examples of Cover 2 popped up all throughout the game last night, but we’ll now focus on two plays where the safeties failed in their primary responsibilities in this defensive scheme.

Mid-second quarter, Jaguars run a 2×2 set from 11 personnel, with tight end Clay Harbor in the left slot. Alden Darby is the play side safety in this situation, and his job is to take away his deep half of the field from the most vertical threat, while reading receivers #1 to #2 (outside to inside). Right away you can see Darby getting width and depth in his zone with his eyes on #1. 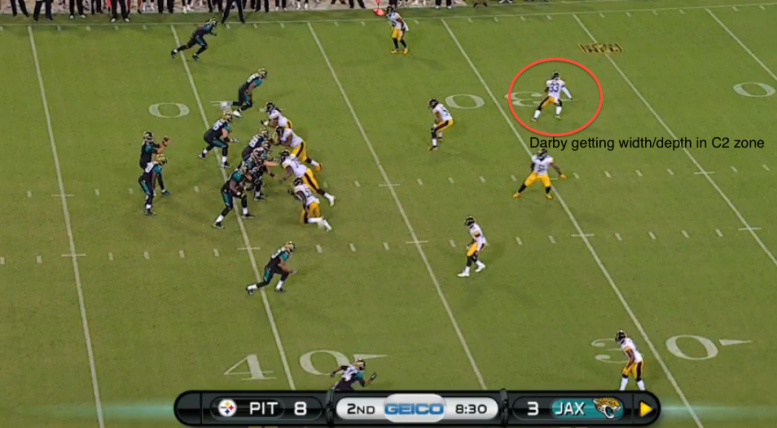 As previously discussed, outside cornerback B.W. Webb’s job is to funnel his receiver to the safety, while sinking to make the vertical throw difficult for Bortles. He’s actually called for illegal contact here as he does this, but replays showed it to be a very ticky-tacky call (Jaguars broadcasters even said they didn’t know about that call).

Some of you might be curious as to why Webb is shaded inside and forcing the receiver to take an outside release, when traditional Cover 2 concepts suggest the corner funnel receivers inside to the safety with an outside shade. The idea is that an inside release by the receiver means the safety doesn’t have to worry about getting all the way to the sideline, and therefore has less ground to cover to make a play on the ball. I don’t know that I have a perfect answer for you as to why Webb forces boundary, but this is definitely what they’ve been coached to do here, as Antwon Blake does the same thing on the opposite side of the field.

My best guess is that by forcing the receiver to take an outside release, Webb is basically eliminating his route tree and making things simple for the safety. An outside release from outside the numbers means only one of two possible routes, the deep comeback or a nine (go) route. No space for the receiver to run anything else. Because Webb’s positioning obviously eliminates any comeback route, the only pattern Darby has to worry about is the vertical shot, meaning he can get width to the sideline right away when he reads the outside release. 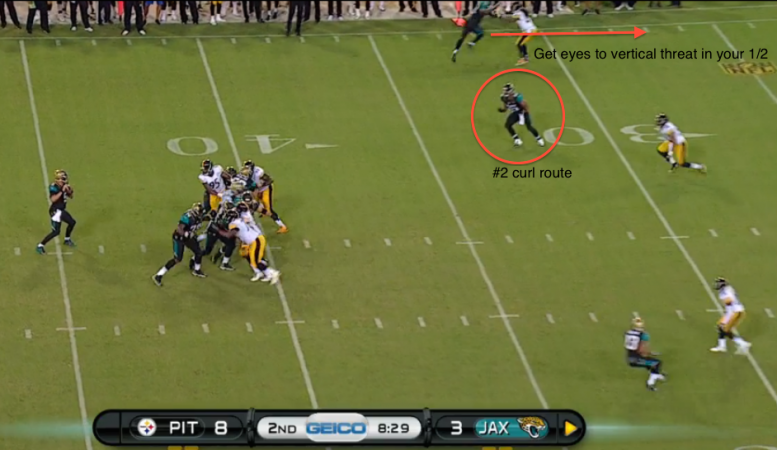 Darby’s job is to read 1-to-2 on his side of the field, so as soon as he sees outside release from #1, he has to know vertical route is coming and get to the sideline. The read is simplified even further when #2 sits down on a shallow curl right in Ryan Shazier’s zone, meaning the safety shouldn’t even be looking at that route anymore. Unfortunately Darby doesn’t read the outside release and is caught flat-footed looking back toward the middle of the field, instead of taking away the vertical option from #1, which is his primary responsibility (unfortunately without All-22 yet I can’t exactly show you this, but Steelers broadcast did show it last night). Easy pitch-and-catch for Bortles and Arrelious Benn.

Another, perhaps more concerning bust in the Steelers Cover 2 defense came late in the first half on Chad Henne’s touchdown pass to Harbor.

Jaguars come out in 12 personnel, with two tight ends to the left side of the formation. Right away Webb sinks to take away underneath options and funnel vertical threats to the safety. 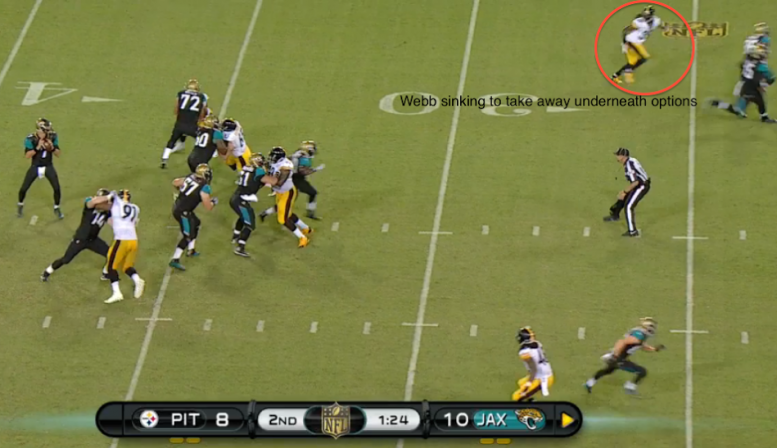 The Jaguars counter with a divide route, a classic Cover 2 beater. A divide route is a Go/Post route combination from one side of the field, designed to put a Cover 2 safety in conflict with two vertical patterns to choose from, one in-breaking and one deep. Typically this route combination is done by receivers, not tight ends, but the Jaguars’ athleticism at the position creates options for their offense that most teams can’t enjoy.

Inside tight end runs a post route, outside tight end runs a nine. Sean Spence alertly carries the post route vertically with tight coverage, which actually makes this read easier for Shamarko Thomas, the safety to this side of the field. However, even if Spence fails to carry the post, Thomas’ read is #1 to #2, outside to inside receiver, taking away any vertical threat by #1. That always takes priority over anything #2 does. 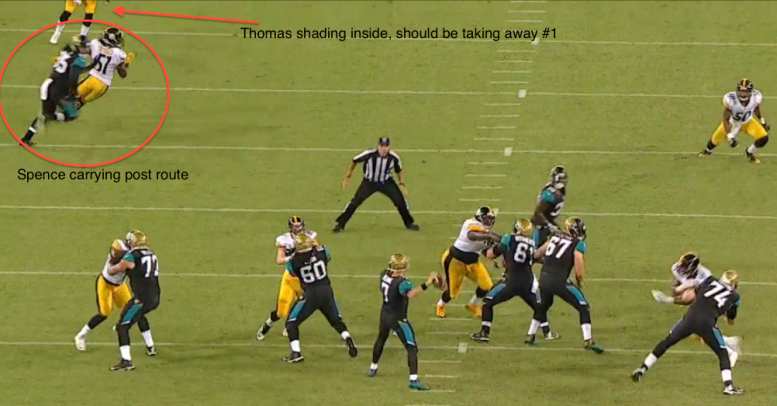 Again, tough to show you without All-22, but Thomas shades inside here with his eyes on the in-breaking route by #2, instead of taking away the vertical threat of #1. The divide route puts the safety in conflict, and when Thomas hesitates and takes a couple false steps inside, the go route is wide open for Henne to hit for the touchdown.

The success of the Cover 2 defense is utterly dependent on the safeties eliminating the opposition’s most vertical threats and taking away the concern of the big play. While many have said Cover 2 safeties must be your best athletes, the reality is that while athleticism is important, football IQ, positioning, and route/release recognition is just as vital, if not more so.

If Darby reads #1’s release properly, he could have better positioned himself to defend the vertical route entering his zone. If Thomas reads #1 to #2, instead of getting caught on the in-breaking route, he doesn’t take false steps inside, and instead gets the width he needs to make a play on the nine route from Harbor. It all goes back to the cerebral aspects of the game, something Pittsburgh’s safeties will have to continue to work on in order to master the Cover 2 defense.