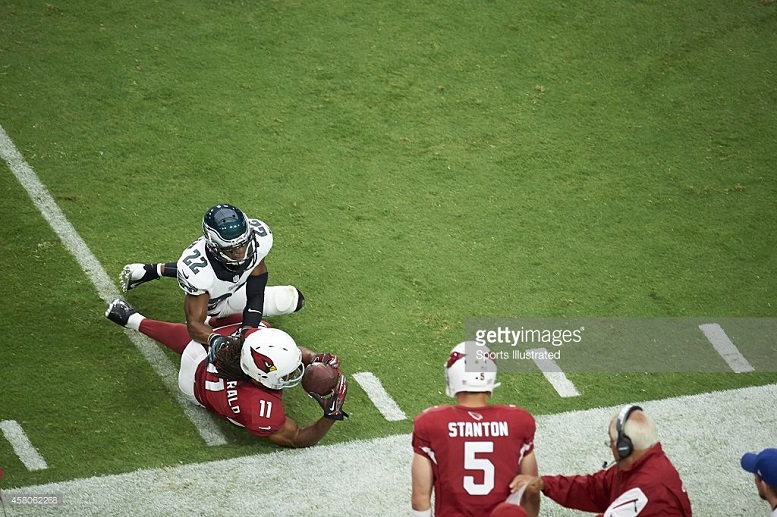 Now that cornerback Brandon Boykin has landed with the Pittsburgh Steelers via a Saturday evening trade with the Philadelphia Eagles, I am slowly making my way back through some his tape from last season. I’ve already broken down his seven career interceptions and today we’ll have a look at what Pro Football Focus graded as being his worst game of 2014.

According to PFF, Boykin’s play against the Arizona Cardinals last season in the Eagles in the Week 8 game was his worst of the season, and after going through every defensive play, I identified nine plays that he was directly involved in.

In this first play, a run, we see Boykin lined up at the top of the screen in the slot and he fights through the block of Cardinals wide receiver John Brown to get in on the tail end of the tackle. Boykin, however, was not credited with an assist on the 9-yard run.

On this next pass play, Boykin is lined up against Brown at the bottom of the screen. After jamming Brown initially at the line, Boykin does a good job of not getting himself rubbed off by the outside receiver. However, Brown works back to the football at the end of his out route and his separation allows him to make the catch on the sideline for a gain of 9 yards.

On the very next play from scrimmage, Brown attempts to beat Boykin at the top of the screen on a go route against a cover-1 defense. While the throw from quarterback Carson Palmer falls incomplete, Boykin is flagged for defensive holding after allowing Brown to have a free release. There wasn’t a good replay of this to see the hold, however.

During the Cardinals next offensive series, Boykin is beat by wide receiver Larry Fitzgerald down the right side for a gain of 30 yards. It’s a tough assignment as Palmer throws the ball way to the outside and right along the sideline after sprinting out to that side. Boykin doesn’t have help over the top but he does do an adequate job of staying in phase and close throughout his coverage. Fitzgerald is the only one that’s going to catch this ball.

Despite Boykin staying tight on this pivot route by Fitzgerald, he still gives up the catch back to the outside. He also has a little problem getting the big receiver to the ground and that leads to extra YAC.

After dropping into a zone bracket coverage at the bottom of the screen on this play, Boykin comes up and makes the tackle on tight end John Carlson. The play, however, was good for 12-yards.

While he wasn’t covering Fitzgerald on this next play that ended in a long touchdown, Boykin fails to hawk down the receiver at the end. In fact, it looks like Boykin pulls up at the end of the play even though he was close enough to make a diving attempt.

On this play, an incomplete pass to Fitzgerald down the field, Boykin does a great job of trailing closely to the inside.

The last time Boykin was directly involved in a play was in the fourth quarter on this screen pass to Fitzgerald. As you can see, his missed tackle attempt leads to extra yardage.

If this was indeed Boykin’s worst game of 2014, I’ll definitely take it. He was beat by a few great throws and his holding call didn’t look obvious. You would like to see him tackle better, however, and that’s something he’ll need to improve now that he’s with the Steelers.