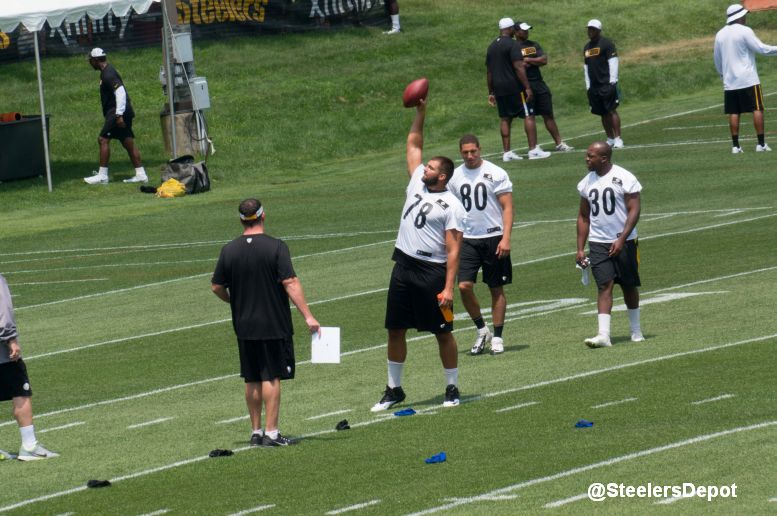 When you have an offense led by Landry Jones and lacking the likes of Ben Roethlisberger, Le’Veon Bell, Antonio Brown, Heath Miller, Markus Wheaton, Martavis Bryant and Maurkice Pouncey, you should enter the game with ridiculously low expectations. If you did, those expectations were likely still too high, as Jones and co. turned in one epic offensive clunker with very few bright spots on that side of the ball.

One of the shining stars of the Pittsburgh Steelers dismal offensive showing was clearly the play of Alejandro Villanueva, whose 6’9, 300+ pound frame protected Jones’ blindside with ease last night. While Villanueva caught my eye several times when viewing him live, I was even more impressed when I got a chance to review his tape this morning. Here’s a few of the highlights from his fine performance.

First thing to note is that Villanueva is facing rookie Danielle Hunter on many of these plays, an athletic freak who is admittedly very raw mechanically. Villanueva’s length gave him tons of issues, as did the power in the Army product’s punch.

Here Villanueva gets into his pass set in a hurry, showing a wide base and quick feet. Sometimes I think he gives up a little too much ground in his pass sets, but that is a much better problem to have than not moving your feet at all.

Villanueva doesn’t even land his punch squarely here, but he does a nice job of staying upright and not doubling-over or lunging at Hunter to compensate for the missed contact. Continues to move his feet, and knocks down Hunter’s hands with a violent swat (you could see this clearer in the TV replay), sending the defensive end reeling off balance.

When Villanueva stays in his stance and doesn’t bend at the waist, his length is an incredible asset.

Check out the punch here, gets his arm shooting out into the defender’s frame, landing his blow right on the chest plate to knock the rusher back. Beautiful form and hand placement, as well as a nice bit of power on display. All vital pass protection tools that Villanueva really seems to possess in abundance.

Because of how long Villanueva’s reach is, as long as his hand placement is sound, defenders can’t get into his frame. That basically eliminates the bull rush from a pass rusher’s repertoire, especially considering how difficult it is to move Villanueva even if he doesn’t show good form.

Absolutely textbook form here, stays upright, delivers punch without waist-bending, and rejects Hunter’s rush twice. You can see the rookie defensive end wants to use his hands and be physical, but he’s helpless against the length and technique of Villanueva, who keeps his hands tight and inside the whole play.

How about his footwork? We’ve seen a strong pass set consistently from Villanueva, but does he possess the quick feet to handle a speed rusher trying to dip the edge on him?

So many offensive tackles would lunge to attempt to crush a pass rusher in this situation, but I applaud the headiness of Villanueva to simply mirror Hunter’s movements upfield and stay in front of his assignment. No reason to get into a hand-fight out there, Hunter isn’t doing anything to affect the play that far out on the perimeter. Stays patient, waits until Hunter tries to shoulder dip the edge, then seals off the corner and shoves the defender well out of the play upfield. Outstanding footwork and discipline by the hulking left tackle.

How about his smarts and blitz recognition? This is undoubtedly one of the areas that still needs to develop for such an inexperienced player, but here’s a great example of Villanueva identifying a late safety blitzer and picking him up flawlessly.

Could maybe stand to move his feet a little bit more to seal off the rusher, but you can clearly see Villanueva identify the blitzer early and initiate contact to clear the defender out of harm’s way. Veteran stuff from the big man.

There was so much to show you from Villanueva’s pass protection, that I didn’t even get into his run blocking, which was also very good. He gets a little over-extended at times, but typically has the power and quick feet to re-set without issue in the run game. He made one great second level block that showed off the raw power his punch possesses. I also love how low Villanueva fires off the ball for a big man, exposing as little of his ample frame as possible to defenders. It should be noted that Villanueva was often a backside blocker during run plays in this game.

Hopefully Villanueva gets the opportunity to face more accomplished pass rushers this season, but his domination of Hunter showed that he has the quickness and technique to best athletic edge rushers. I’d like to see him against a pass rusher with more violent hand usage and a stronger counter game, but Villanueva’s physical tools should translate well even into more challenging matchups.

Could he be the answer to the Steelers depth issues at offensive tackle? Only the four remaining preseason games will tell us for sure, but so far, it is impossible to not be excited about the play of Villanueva this summer.