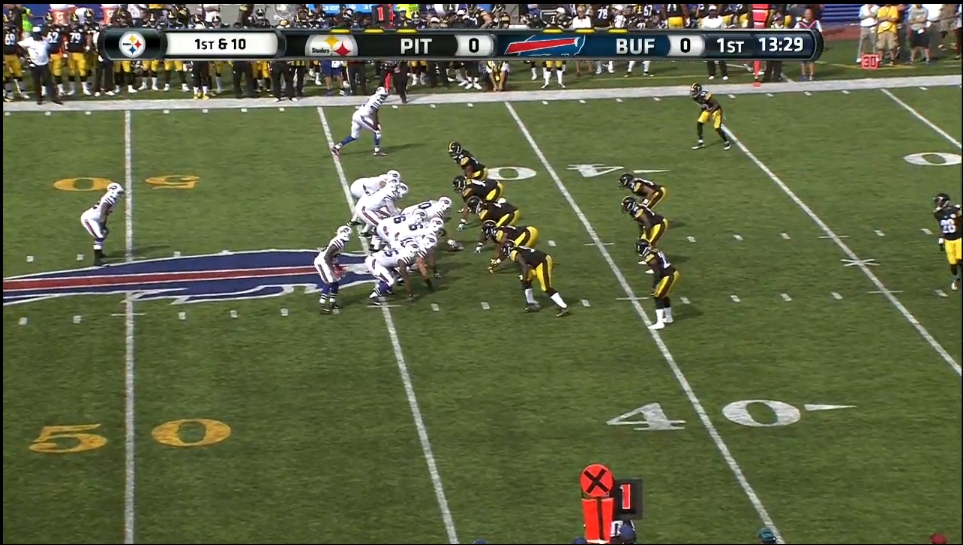 When opposing quarterbacks combine to go 30-33 for 386 yards, three touchdowns and zero turnovers, you know it has been a bad day for your defense. When those four signal callers all play for the Buffalo Bills, you start to question the legitimacy of the unit as a whole.

The Pittsburgh Steelers started slow defensively and never recovered, as the Bills gashed the Steelers for 530 total yards and 43 points on their way to a 43-19 victory on Saturday afternoon.

Fred Jackson opened the scoring with a touchdown plunge from a yard out, after the 34 year-old running back set himself up with a 41-yard romp through the Steelers defense on the Bills first play from scrimmage.

Pittsburgh would rally to take an 8-7 lead after DeAngelo Williams walked in from a yard out, before adding the two point conversion despite slipping and falling behind the line of scrimmage initially on the play. Williams had four touches for 25 yards in the game, breaking tackles on a couple of occasions and running with good vision.

The lead wouldn’t last long, as Charles Clay got behind Vince Williams for a 67-yard touchdown pass from E.J. Manuel, one of four Bills quarterbacks to post strong numbers on the day. It was another example of how the Steelers Cover 2 defense is still progressing, as Williams didn’t carry the vertical route in his assignment as he should have.

Pittsburgh countered with 11 unanswered points on a Garrett Hartley field goal and a Landry Jones to Martavis Bryant touchdown connection from 39 yards out. Bryant, fresh off news of his upcoming four game suspension for substance abuse, lit up the Bills secondary for three catches, 138 yards and a touchdown, while drawing several pass interference flags down the field. Sammie Coates added the two-point conversion following Bryant’s score.

The conversion would be the last of the scoring for Pittsburgh, as Buffalo dropped 30 consecutive points over the 30:35 of game time. The Steelers couldn’t get anything going after halftime on offense, as Landry Jones and co. managed only 45 yards of offense in the second half.

One silver lining for Pittsburgh was that Michael Vick looked great in his first snaps with the team, going 4-5 for 106 yards in his debut. On Vick’s very first snap he wrist-flicked a 63-yard bomb to Bryant down the right side of the field, showing that his trademark arm strength hasn’t diminished much since last season.

The Steelers were dominated in time of possession by a ridiculous margin of 17:40, as the Bills hit explosive plays down the field and showed the ability to march methodically on Pittsburgh’s starters and backups.

Vince Williams and Josh Harris both played, while Lawrence Timmons, Stephon Tuitt, Darrius Heyward-Bey, and Mike Mitchell all did not dress. Hartley and Bud Dupree both left the game early for Pittsburgh with hamstring and foot injuries, respectively. Mike Tomlin seemed to indicate after the game that Hartley’s injury could be serious, potentially leaving the Steelers in search of their third kicker in the past couple weeks.