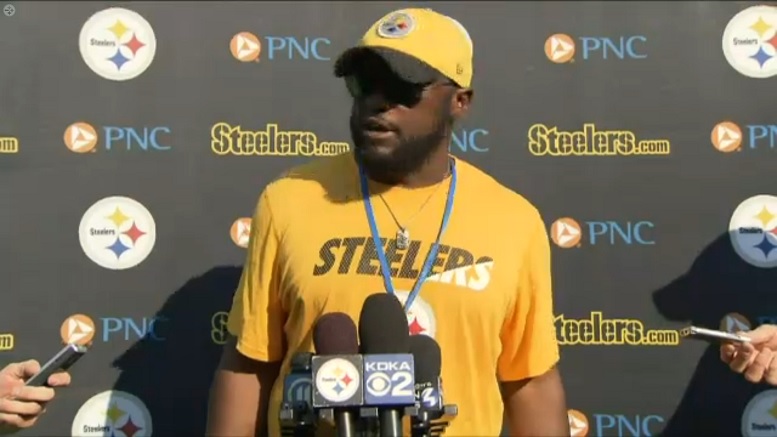 The Pittsburgh Steelers have now put the wraps on their Sunday practice at Saint Vincent College and head coach Mike Tomlin talked to the media at the conclusion of the session to talk about what took place during the day.

“Good to get back out here and start the last week that we’re going to be in Latrobe,” started Tomlin. “Good energy and enthusiasm, and really nothing’s changing for us. We’re going to continue to practice Steelers versus Steelers here at the front part of the week and very much in a training camp-like mentality – competition and so forth.

“We’re going to do similar things, but obviously the discussion around the things that we’re doing are going to change and be more detailed oriented. We’ve been in a couple of stadiums now so we know some of the issues. I want to see the guys working to eliminate some of the issues whether it’s above the neck, whether it’s technical, or what have you. So it was a good start in that regard today.”

Tomlin did somewhat address the health of the team following Sunday’s practice.

“Got some guys who have been out with injuries working back,” said Tomlin. “Guys like Mike Mitchell and Robert Golden which is good. One injury to speak of, I think David Nelson went down with a shoulder of some kind. Don’t have a lot of information to know the severity of that. We’ll get him evaluated. Obviously it’s a big week for him having to acclimate himself and try to etch out a role so we can take him into a stadium to see what he’s capable of. But we’ll evaluate that and proceed accordingly.”

Tomlin later added that there’s currently no new news on tackle Mike Adams (back), who remains on PUP. He was, however, happy to get quarterback Bruce Gradkowski back practicing again.

“Bruce had been working quite a bit at the end of last week and probably the reason we didn’t bring him back last week was because it was a short week,” said Tomlin. “So, no surprise that he’s back out, but obviously good to have him out.”

Linebacker Lawrence Timmons failed to practice Sunday because of the toe injury he suffered last week during practice but Tomlin refused to say he’s injury is a significant one.

“I wouldn’t tag significant on it,” said Tomlin of Timmons’ toe injury. “I like Lawrence, so I’m going to take care of Lawrence.”