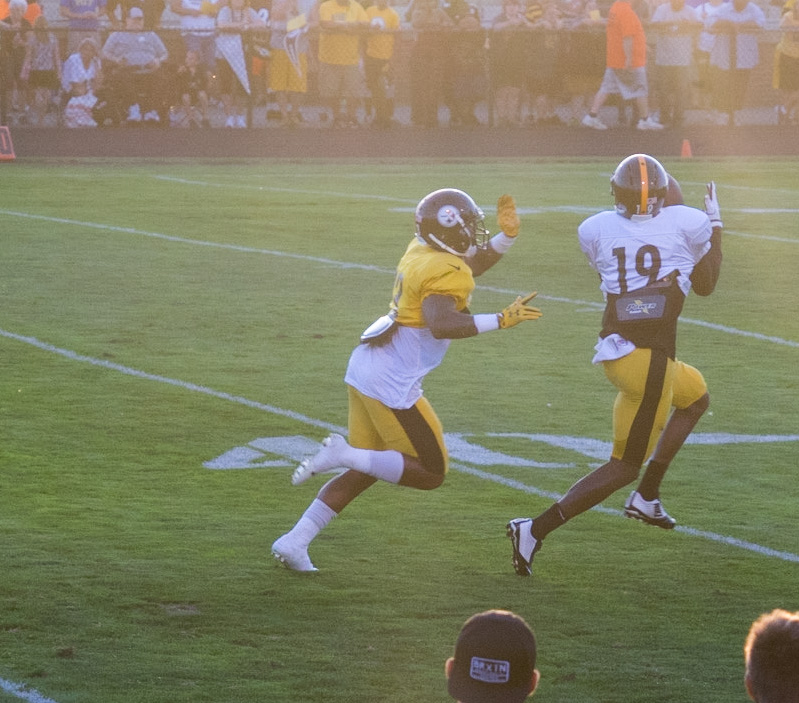 Your winners and losers from the Pittsburgh Steelers 23-21 preseason loss to the Jacksonville Jaguars.

James Harrison: The 37 year old got his first game action this year after officially joining practice on Tuesday. He responded with a sack, his classic rip move under Luke Joeckel to sack and create a forced fumble against Blake Bortles.

Martavis Bryant: Like Harrison, this was Bryant’s first game action, returning from his elbow surgery this past week. He led all receivers with 55 yards, including a 44 yard touchdown from Ben Roethlisberger, nearly knocking over the corner attempting to jam him. A big play from a guy who routinely makes them.

Jawon Chisholm: I know the stat line doesn’t read well, seven carries for 13 yards, but he showed good explosion and doesn’t waste his steps. Finds the hole and gets downhill. The difference between a guy like him and Cameron Stingily, or even last year’s preseason bodies like Jordan Hall and Miguel Maysonet, is startling. Chisholm has a real shot for the practice squad.

Ryan Shazier: It wasn’t a perfect game. He could have done a more sound tackler. But the guy was everywhere, leading the Steelers with eight tackles, while continuing to show physicality at the line of scrimmage. Getting his nose in the pile, meeting the fullback in the hole, all things he’s needed to show and has two games in.

Garrett Hartley: Because kickers are people, too. There is obviously zero correlation for preseason to regular season but there may be a twinge of comfort seeing him nail field goals from 48 and 29 yards.

C.J. Goodwin: Goodwin didn’t enter the game until well into the second half but made his chances count. He scored the then go-ahead touchdown, taking a big shot on a slant as he crossed the goal line. Held onto the ball, a nice response after his fumble in the Hall of Fame Game.

Sammie Coates: Not a perfect game either but that’s not the goal. You just wanted to see improvement and you got that from the third round rookie tonight. His toe tap along the sidelines was spectacular, earning a big high five from a fired up Mike Tomlin. Led all receivers with five receptions.

Kevin Fogg: Played everywhere, in the slot and on the outside, while making another open field tackle and a great break on the ball, knocking away a slant on the goal line. Very difficult route to defend and Fogg did a good job.

Shakim Phillips: It’s all about the response and the rookie underwhelmed his second time out. He had two drops tonight and finished the game with just one catch for twelve yards. With good days from Goodwin and Coates, Phillips lost whatever step he gained out of the Minnesota Vikings game.

Chris Hubbard: Back-to-back weeks of “below-the-line” play for him. Struggled to hold the point of attack and was also hit with a hold. I have to get back into the tape but there was a missed stunt pickup on his side that resulted in a sack.

Jarvis Jones: Jones didn’t generate much pressure and his lack of athleticism was evident on Bortles’ touchdown, failing to chase the quarterback down. He hasn’t done anything to quiet the concerns over if he can be a quality pass rusher at the NFL level, even if his run defense is strong.

Safety Play: Twice, the Steelers gave up big plays, including a touchdown, from their Cover 2 shell. In each instance, the safety – Shamarko Thomas once and Alden Darby the other – failed to get the width to defend it. Preseason is the time to rep these concepts and work the bugs out, so there’s no reason to panic, but they were negative plays.

Coverage Units: Not their best outing. The Steelers allowed three returns of 30+ yards. Twice on kickoffs and a 37 punt return by Rashad Greene where Brad Wing was forced to chip on the tackle. Granted, these units were made up of players who won’t be out there in Week One against New England, but you can bet Danny Smith isn’t going to bed happy.