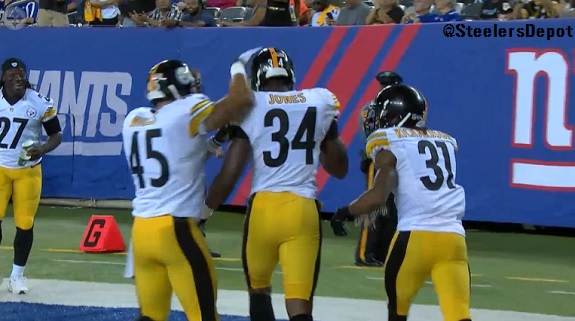 With the Pittsburgh Steelers seeming increasingly likely to carry a rare 10 linebackers on their 53-man roster this season, that likely means that we won’t have what has typically been a staple on the practice squad this year: the developmental linebacker.

If the Steelers do choose to carry 10 linebackers, the fact of the matter is that that is more than enough bodies to work with during the week, and more than enough to play in games on Sunday. They simply will have no need to carry another linebacker on the roster.

Thus, if we assume that Terence Garvin locks down his fifth inside linebacker spot for a third straight season and that rookie Anthony Chickillo makes himself too valuable at outside linebacker and on special teams to cut, then there simply won’t be any need, nor room, for some of the other linebackers in camp to remain a part of the organization.

That number includes Jones, of course, as well as second-year draft pick Jordan Zumwalt, who has played well during the preseason. Shayon Green, a seventh outside linebacker, has also received some valuable reps throughout camp after coming in seemingly as a longshot from the very beginning.

All three of those players will likely be looking for work with another organization after the preseason is over simply because the Steelers have too many players ahead of them that can play and no need for an excess at the position.

I expect and predict that there will be no linebackers represented on the practice squad this year, but only, and simply, because all the linebackers that they intended to keep will remain on the 53-man roster.

One slight caveat to this could be if Ian Wild ends up making the practice squad, who due to injuries at inside linebacker has been playing that position for the past couple of practices. He played the position in college and in the CFL, but the truth is that he doesn’t have the size to remain durable playing in that role with regularity in the NFL. But he would be an eligible practice body for a linebacker role.

If safety ends up being the spot that gets short-changed thanks to the numbers kept at linebacker, then you can expect the Steelers to keep at least two defensive backs on the practice squad, if not more. They, surprisingly, have depth at both cornerback and safety.

If things do end up going as I predict, then it will seem a bit odd, lacking that linebacker presence on the scout team. But that is simply a sign that what they had as candidates for that role were too valuable to risk losing. And that gives them room to insulate their depth at other positions.