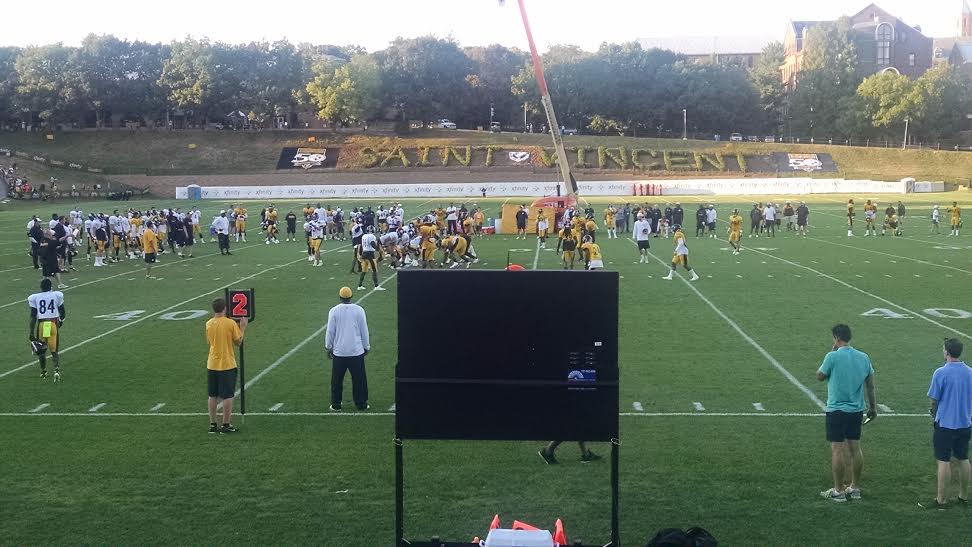 I was late to review the Hall of Fame game thanks to issues getting Game Pass sorted out, so my post-HOF game roster prediction came a bit late as we.. There were a few changes, though only one on offense. A couple of injuries settled certain things. I’ve also finally jumped on the 10 linebackers theory, though I stand strong on the belief that the team will continue to carry three quarterbacks. The practice squad was particularly fun to sort out this time, and the last spot or two could have gone in a number of directions.

Analysis: No changes. The Steelers are challenging Jones to keep his roster spot this season because they need him to. I saw progress in the Hall of Fame game, enough to keep him on the roster until I see more tonight and in the last three games.

Analysis: No changes. The two rookie running backs that the Steelers signed after the draft have already been waived with injuries.

Analysis: No changes. In fact, the same analysis from last time sticks: there really is no meaningful competition, and his contributions as a tight end are equally important.

Analysis: No changes. Eli Rogers probably had the best shot of taking up a sixth spot, but he’s gone, as is Devin Gardner.

Analysis: No changes. James had a pretty rough first game that was put into better context with the news that he was dealing with the death of a close friend in the days leading into the event. He will rebound. Plus, there’s not much competition here either.

Analysis: No changes. Villanueva, overall, was pretty impressive in pass protection during the preseason opener, where his size was readily apparent. Again, Adams’ injury only makes it even more likely that they carry four tackles.

Analysis: One change. I’m torn, however, because Hubbard struggled a lot in the first preseason game. I originally had Miles Dieffenbach on the 53-man roster.

Analysis: No changes. Wallace showed about what you would expect out of him in the preseason opener, and was by far the best interior lineman outside of DeCastro.

Analysis: One change. Thomas would be on my 53-man roster right now regardless of the situation with Clifton Geathers. I broke him down in the preseason opener, and he showed significant improvement over last year, with his first step in particular being readily evident and leading to more one-on-one victories. His versatility is also a factor. Walton remains the fourth defensive end as the member of the group with the most upside.

Analysis: No changes. McCullers will play when he gets healthy, of course, but Thomas showed that he can be trusted inside as well, and the Steelers value carrying a third body at nose tackle with a versatile player.

Analysis: One change. I had Howard Jones making the roster over Chickillo prior to training camp because I thought he had the most upside with that athleticism, but I’m still waiting for him to put it together. I just got a chance to look through Chickillo’s tape from the first game, and it made this call for me. He was active on all special teams unit except for field goal attempts, which is key.

Analysis: One change. While I struggle with the idea that the Steelers would actually carry 10 linebackers, I think that the talent will dictate that they do it. What swung the vote for me was watching Garvin play on defense in the preseason opener. He looks bigger and plays with instincts. His value on special teams is already more than evident. So he gets his roster spot back from me.

Analysis: One change. Obviously the acquisition of Boykin changes things. I expect Senquez Golson to be on injured reserve, otherwise it’s Webb out of a roster spot. Kevin Fogg had a good first game, however, including, notably, making the tackle on the blown punt coverage.

Analysis: One change. I had to make a sacrifice somewhere, and I have Ross Ventrone losing his spot. It didn’t help matters that he got injured early in camp. Because both Garvin and Chickillo look like they can play on defense, I have the lost couple of roster spots going to these linebackers.

Analysis: No changes. Jordan Berry showed off a big leg with good hang time in the preseason opener, but I need to see more.

Analysis: No change. No competition.

Analysis: He is suspended, after all.

Clear is the only option for the practice squad tight end. Finney’s versatility edges Dieffenbach for now. Hemer has shown the most among the defensive ends. Fogg was a hard cut as it is, while Van Dyk gets a spot because of Adams’ injury, because he can play inside and outside, and because he actually looked halfway decent.

Yes, for now, I still have the Steelers holding on to Holliman’s upside. Between the 53 and the practice squad, that’s 13 defensive backs.