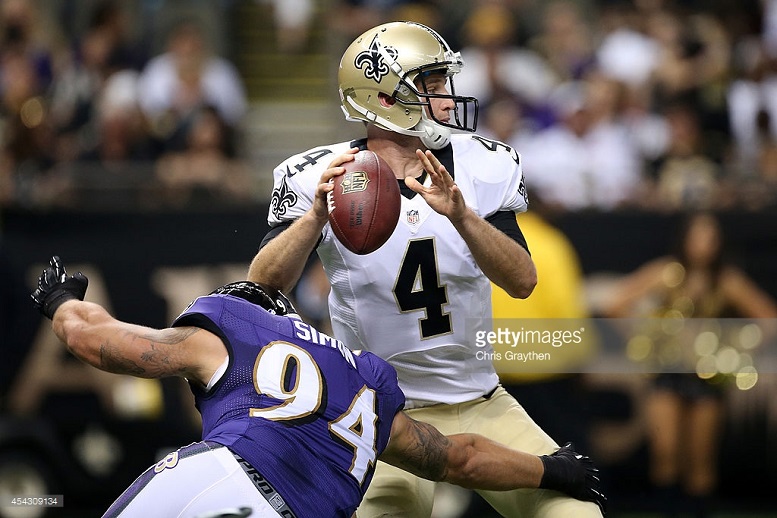 If you’ve watched the Pittsburgh Steelers first two preseason games of 2015, you’ve probably noticed that while third-string quarterback Landry Jones has made some minor improvements, he’s still got a long way to go to prove that he belongs in the NFL as a potential second or third string signal caller.

The Steelers once again appear to be dead set on carrying three quarterbacks on their 53 man roster this season and should Jones fail to show the team anything more than he already has, then the organization should strongly consider looking around the league for an upgrade.

Nearly one full year ago, I wrote about how the Steelers should strongly consider claiming former Tulane quarterback Ryan Griffin off waivers from the New Orleans Saints. That ultimately didn’t happen and Griffin went on to spend most of the 2014 season on the Saints practice squad before finally being promoted to their 53 man roster later on in the season. At that time, it was reported that St. Louis Rams had interest in signing Griffin away from the Saints and that that was the reason for his late-season promotion.

In Griffin’s 2015 preseason debut Thursday night against the Baltimore Ravens, he entered the game with 2:12 left in the first half after Luke McCown exited. Griffin proceeded to lead the Saints offense on a six play, 90 yard drive that culminated in a 21-yard touchdown pass to running back Khiry Robinson. Before finally giving way to rookie third-round draft pick Garrett Grayson at the start of the fourth quarter, Griffin was 10-of-17 for 112 yards with the one touchdown.

Being as the Saints spent a third-round selection on Grayson this year, it would appear as though Griffin is battling McCown this preseason for the right to back up starter Drew Brees in 2015. Should he fail to win that battle, the Saints will again have a big decision to make that could ultimately result in the waiving of the 6-5 quarterback. McCown, in case you’re curious, looked good Thursday night as he was 7-of-10 passing for 75 yards and a touchdown in his limited action.

Griffin might never become a bonafide second-string quarterback in the NFL, but for teams looking for a No. 3 signal caller who still has No. 2 potential, the Tulane product would fit that bill.

In case you don’t remember, the Steelers showed some interest in Griffin ahead of the 2013 NFL Draft as quarterbacks coach Randy Fichtner reportedly attended his pro day that year and that included the two having dinner the night before the workout took place.

We’ll see how Jones performs during the final three preseason games, but if the Steelers front office is smart, they’ll also be watching Griffin’s performance in the Saints final three preseason games as well, and especially if they’re dead set on keeping three quarterbacks on their 53 man roster once again. However, if they do watch Griffin closely over the course of the next few weeks, they probably won’t be the only team doing that.

In the end, this might very well wind up being a moot point as McCown could potentially wind up being the odd man out in New Orleans, even though he’s currently listed as the No. 2 on the Saints the depth chart. Saints head coach Sean Payton was asked about the quarterback competition behind Brees during his Sunday press conference and he hinted that keeping McCown this year isn’t necessarily a given.

“I think that we have not set in stone for instance this is how our two is,” said Payton, according to WWL-TV in New Orleans. “Obviously Luke’s (McCown) competing. Ryan Griffin, Garrett (Grayson), those guys are all handling their snaps well and as camp goes on we will get a better feel for what our plans are. Overall those guys have been handling the reps that they are getting very well. Certainly you would like experience at that position and yet I wouldn’t say it is a prerequisite.”