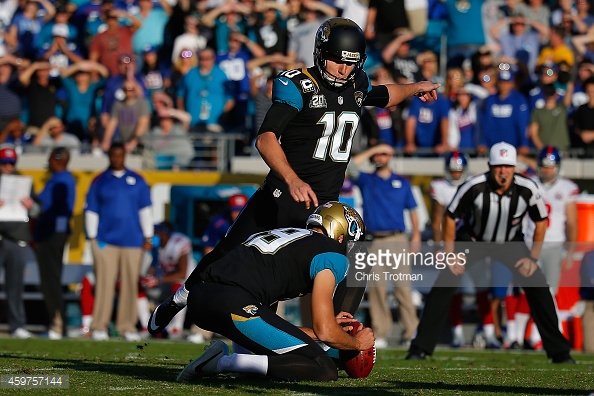 It appears as though the Pittsburgh Steelers won’t be restructuring the contract of new kicker Josh Scobee after all.

A short time ago, Ray Fittipaldo of the Pittsburgh Post-Gazette reported that the Steelers were planning on restructuring the contract of Scobee, who the team acquired Monday morning via a trade with the Jacksonville Jaguars. While that might very well have been their intentions, Jason La Canfora of CBS Sports is now reporting that that didn’t come to fruition.

Josh Scobee will receiver his full $3.45M for 2015 post-trade though sounds like Jags will be paying part of it. PIT was interested in…

Adding a year for Scobee but that didn’t come to fruition. Steelers did cold weather homework on the kicker and pursued the deal… — Jason La Canfora (@JasonLaCanfora) August 31, 2015

Strong commitment by the Steelers, who are already paying two other kickers. If Suisham can come back in 16 maybe he’s the guy…

La Canfora did add, however,  that it sounds like the Jaguars will be paying some of the  $3.425 million base salary that Scobee is scheduled to earn this season as part of the deal. La Canfora did not say how much that amount will be.

Immediately after it was announced that the Steelers had traded for Scobeee, I immediately wondered if they were able to get the Jaguars to eat part of his 2015 base salary. As I pointed out, the Steelers were able to do something similar in 2013 when they traded with the Arizona Cardinals to acquire tackle Levi Brown.

At some point during the next few days, we’ll know all of the specifics related to this trade as it relates to not only salary owed to Scobee by both teams, but the draft pick compensation as well.