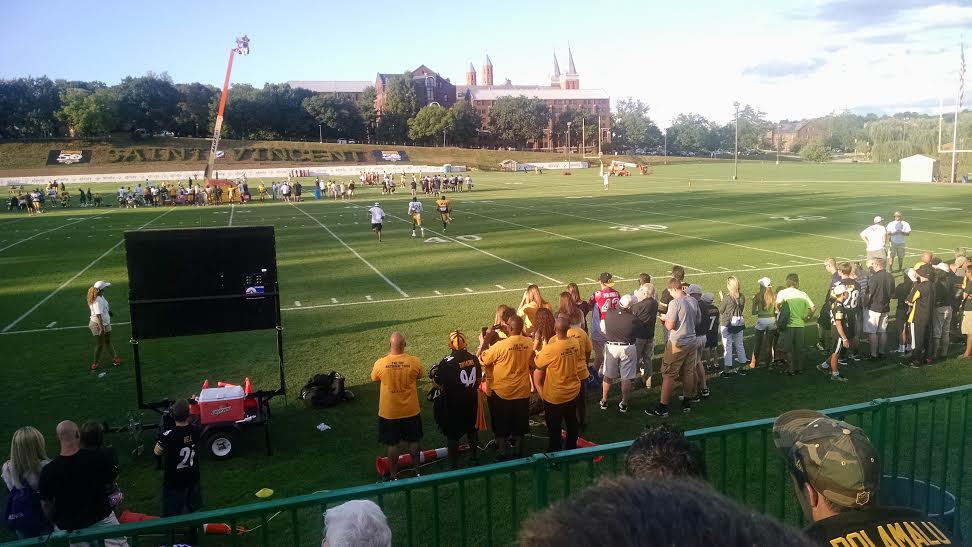 With 13 practices and a preseason game in the books, there’s a clearer – though still partly cloudy – picture of who is going to make the Pittsburgh Steelers’ roster. Here’s my second crack at predicting the roster and practice squad.

Analysis: (No Changes) I’ll continue to stubbornly state my case against Landry Jones, universally panned as not being worthy of making the 53 man roster. It seems insane for us to repeat that line and then throw him onto the roster anyway attached with a “that’s what they always do” cavaet. Eventually, that’ll change. That starts this year.

Analysis: (No Changes) Nothing to add here. Roosevelt Nix shouldn’t be seen as competition.

Analysis: (No Changes) Even if I wanted to exclude James from the roster, and I don’t, there’s no one to replace him with. Barring injury, this trio isn’t going to change for the rest of the preseason.

Analysis: (No Change) Ran out of room to put C.J. Goodwin on here. Still four games left and plenty of time, but his performance in the HOF game wasn’t exactly impressive either.

Analysis: (No Changes) Villanueva’s strong performance only strengthens, though doesn’t yet lock, his roster spot. If Mike Munchak gets to keep nine, they won’t have to even entertain the idea of choosing between him and Adams.

Analysis: (One Change) B.J.Finney could still work his way onto the roster and I’m the first to say Hubbard’s performance was poor in the Hall of Fame game. But he is the veteran who spent the whole year on the roster while Finney is still a rookie UDFA. Advantage Hubbard until someone proves he can knock him off.

Analysis: (Two Changes) Arguably the biggest shift in my roster. Clifton Geathers is gone and I’ve officially whiffed on the notion Matt Conrath could make this roster. That vaults Thomas into the #3 spot, leaving the only discussion about who will grab the #4. Ethan Hemer presents good competition, and uses his hands more efficiently than the rookie. But Walton is undoubtedly a better athlete.

Analysis: (No Changes) Both guys are locks.

Analysis: (One Change) Welp, the Shawn Lemon prediction failed miserably. Unlesss there’s a big change from Howard Jones, I really don’t see him as competition to Chickillo. Jones will flash but is far too inconsistent and frankly, unrefined and unprepared as a pass rusher, to make him a serious threat to the already more refined Chickillo.

Analysis: (No Changes) And this group isn’t changing, provided they all stay healthy.

Analysis: (One Change) Adding Boykin to replace Senquez Golson, who is likely to start the year on the reserve/PUP list. Every team needs a guy like B.W. Webb so he snags the 6th spot.

Analysis: (One Change) Alden Darby and Ian Wild are making a strong push, but the thought of them going from complete unknowns to the 53 man roster seems a little too strong. This is a position that will create some difficult decisions. The Steelers seem is determined to keep him around after discarding so many other players. His special teams prowess gets him on. The worry is that since he’s a vested veteran, the team will cut him to avoid paying him a full year salary should he get released mid-way through the year.

Analysis: (One Change) I’ll flip-flop and put Wing here. Just seems to have a better leg and that gives him the edge.

Analysis: (No Change) And there won’t be one, either.

Analysis: (Nine Changes) Complete upheaval of my practice squad. Clear is the only carryover from the first to second list. Murphy is really intriguing as this do-all player. He can be the scout team QB, play some receiver, and even be a special teams body in practice. They’re really giving him as many opportunities as possible and that really says something about what they think of him.

Phillips’ body control is impressive and earns him a hat on here, especially with all the injuries to the position that have helped crack the door. Goodwin lands here, too. Van Dyk is a road grader who looked just as good at guard as he did tackle. Finney reverts to the practice squad. Zumwalt’s solid play puts him back on here while Fogg continues to shine in practice. Safety was so tough for me but Wild edged out Alden Darby, who I originally had on here. Like I said, going to be some tough cuts. If Gerod Holliman was a UDFA and not a 7th rounder, no one would care that I left him off the list. I’ll think about putting him back on once he makes his first true tackle.

Kevin Fogg was a hard-luck loser on here. Just ran out of spots. Over 800 players are going to be cut by the time Week One begins. It’s part of the sport.