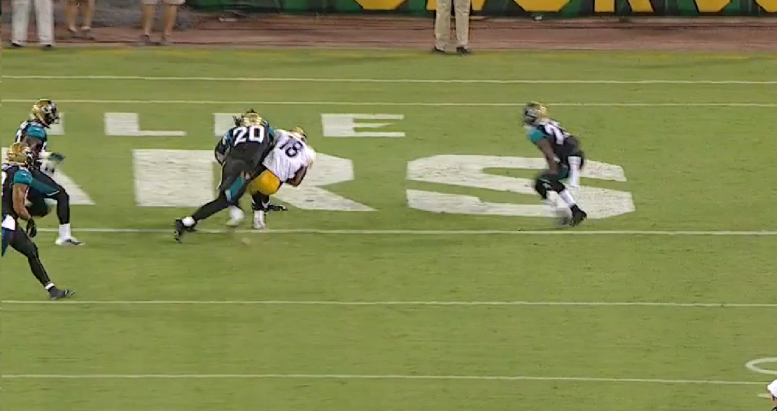 Last night was a bit of a big night for Pittsburgh Steelers first-year wide receiver C.J. Goodwin, who is seeing his first game action this preseason since playing college ball. Goodwin joined the team late in the offseason last year and did not log any time on offense during the four preseason games.

The Steelers liked his potential, however, keeping him on the practice squad the entire year while many other players came and went. That says a lot about an undrafted rookie who didn’t play at all.

So I’m sure that the Steelers were just as anxious to see Goodwin hit the field on offense this year as he was himself. And he received a bit of a rude awakening to life in the NFL on Sunday night when he took such a hard hit after his first reception that he lost possession of the ball before going to the ground.

Goodwin acknowledged after that game that he is still earning to adjust to the level of size, speed, and physicality that you see on a play-to-play basis on the NFL level, which was certainly not aided by his lack of preseason playing time the year before.

But the young receiver seems to have made the necessary adjustments in just a few short days, as both of his receptions last night were met with some hard, jarring hits, and he looked comfortable maintaining control on the ball both times.

Goodwin checked into the game in the middle of a drive about a third of the way into the fourth quarter, and quickly drew a defensive holding call, and what should have been pass interference as the cornerback climbed over his back to deflect a pass.

It was a few plays later when Goodwin hauled in a 21-yard pass down the field on a drive where everybody around him was dropping the ball. He took a big hit from the safety, but held on to the ball in a way that was highly cognizant of the importance that he do just that.

While the offense couldn’t convert into the end zone at the end of that drive, they quickly got the ball back thanks to a special teams penalty, and were soon able to cross the goal line, with Goodwin providing the exclamation point.

Or rather, it was strong safety Craig Loston who provided the exclamation point with a big shoulder into the lanky receiver’s frame. But Goodwin held on without incident, just five days after his first reception ended in a turnover thanks to a similar hit, thought one he had more time to prepare for.

With the rest of the group of receivers that are likely looking from outside the roster bubble not performing up to a sufficient level, Goodwin is seizing upon the opportunity to address one of his main criticisms—toughness and physicality—while assuring that he remains in prime position for the sixth wide receiver spot, whether that comes on the 53-man roster or on the practice squad.