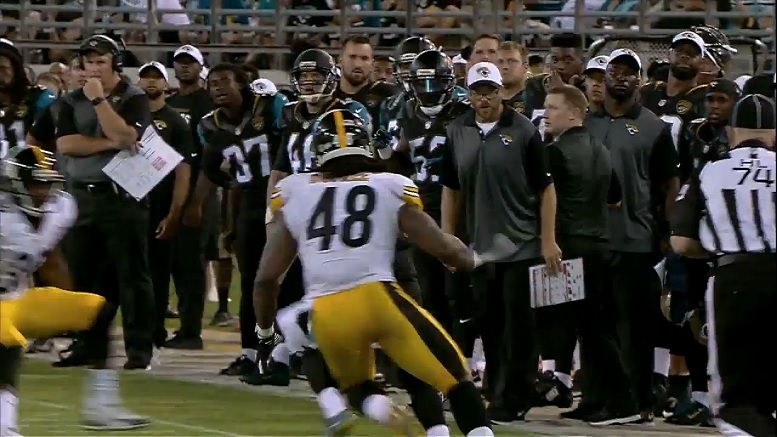 After a week of making headlines for his fighting on the practice field, Pittsburgh Steelers rookie first-round outside linebacker Bud Dupree is finally drawing attention to himself for the fight he has shown on the playing field.

The freshman edge defender had had a tough go of things during the Steelers’ first two preseason games, which drew heavy scrutiny from many different corners, from the media, and especially from the fan base, growing impatient to see improvement in a pass rush that has dwindled for the past four seasons.

Dupree was raw in his game coming out of college, but is a player whose massive potential dictated by his superior size, speed, and athleticism made him a first-round pick, and one that the Steelers jumped at the chance of selecting when he became available in their slot.

Predictably, it has been a slow transition for the rookie as he learns the outside linebacker position that he converted to in the middle of his college career, and for which he never had a proper position coach.

His struggles were reported on the fields of Latrobe, and translated onto the playing surfaces of the first two preseason games, where he often looked lost, unable to disengage from blocks, and unsure of what to do on the pass rush once he got up the arc.

It did not help, I believe, that the Steelers had a short turnover from the first preseason game to the second, giving Dupree little time to absorb his experience and improve from it. The team had an extended week leading into yesterday’s game, however, and that may have served him well.

The rookie was visibly improved, though still not without his flaws, and still thinking about what he was doing, but he did so while producing some notable highlights.

Of course, he produced his first sacks, and really first meaningful pressure, of the preseason. Though it came unblocked, he showed well in pursuit, not allowing the quarterback to escape.

Dupree had an earlier sack taken off the board due to an offside penalty, though it was a bit slow to develop and, given the situation—third and 15 and knowing there was a penalty—he likely would not have gotten there in time otherwise.

Dupree registered two other notable pressures, first on the James Harrison safety in which he dropped into coverage only to blitz late to cover any escape route, and later on a sack by Ian Wild that the outside linebacker likely would have had for himself otherwise.

Equally important was his display in the running game, just two plays before the safety, showcasing the ability to get off of a block, keeping his outside arm free, to make the stop on the ball carrier.

There was also plenty of things he put on tape yesterday that will be open to scrutiny, but that is to be expected. The fact that Dupree has had the ability to flash some into what the Steelers believe he will develop into must be taken for the encouraging sign that it is.