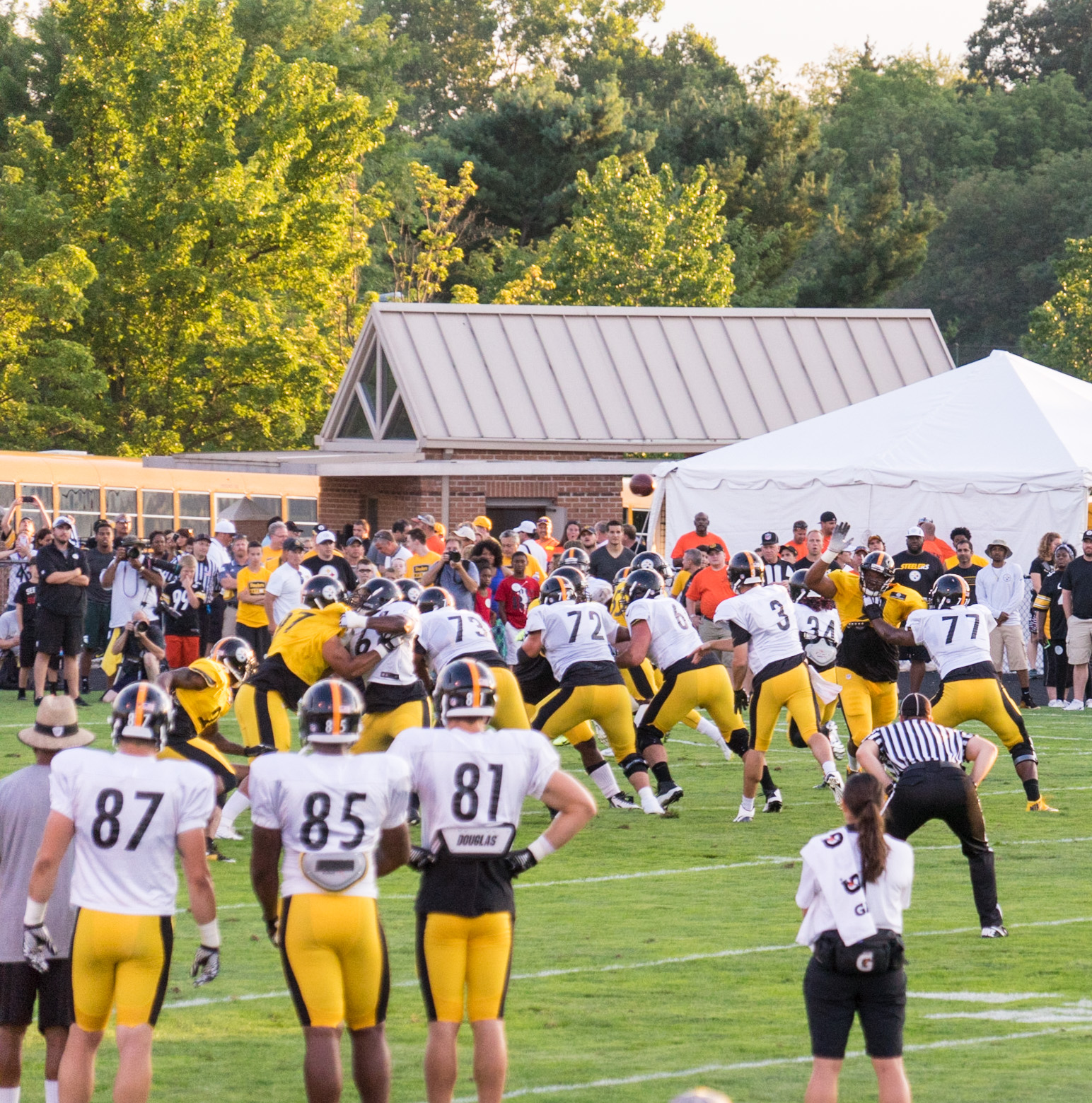 As the final week of training camp winds down, it has come to my attention that for many of these players, this will be the last time we get to see them on the practice fields of St. Vincent College. And while their on-field contributions likely won’t be missed, this team has become like a family to each other during the past month, and even ancillary members of that group will be missed.

But football is first and foremost a business, with first cuts coming on September 1st, now exactly two weeks away. The roster will go from 90 players to 75 that day, and then from 75 to 53 just four days later. Training camp ends on Friday of course, its conclusion also marking the end of daily practice reports by Alex and myself. In honor of the upcoming final days of camp, here is who and what you should mentally and emotionally (ok, maybe that’s a stretch) prepare yourself to say goodbye to in the coming days.

Few individuals represent the sounds of Steelers camp like Danny Smith, whose fire and passion are contagious throughout the roster. He demands excellence of his players, often using humorous lines and intricate body language to convey his point. We’ll miss him chewing out Anthony Chickillo and Shayon Green, but mostly we’ll miss the levity he brings to practice.

Perhaps the best example was during field goal drills on one of the first days of camp, when Ben Roethlisberger jumped in to hold for a try, and Smith took one look at the star quarterback and yelled, “What the hell do we have here?!” Priceless.

He’s only been here for three practices, but Heard has absolutely taken some of the biggest shots of camp during that short times. Ian Wild and Mike Mitchell both laid him out yesterday, the latter forcing a fumble with the hit. Poor Heard, come in to camp for a couple days, take some reps, get the snot kicked out of you, then likely one of the first roster cuts in two weeks.

If you’ve never seen a Matt Spaeth route, well, you need to make sure you get down here for one of the final days of camp. Spaeth looks like he’s running on stilts, with big choppy steps and ridiculously stiff lower body movements. He’s like a flamingo, looks fine when he’s standing in line with the tight ends, but nobody wants to see that bird fly. Just rough.

Yep, I just compared Spaeth to a flamingo.

Admit it, Jones getting so many reps in place of the banged up Bruce Gradkowski has been heavenly for you all. You love to rip mercilessly on the quarterback when he makes one of his many misfires, and you love to talk about how eclipse-like his few good throws are. How about when he throws interceptions?! Might as well bring a starving man to Golden Corral, that’s what that is like for y’all. He’s gonna make the final 53 too, which means we’ve likely got one more training camp of fun ahead of us. I can’t wait.

Nobody builds team chemistry like Foster, whose booming voice can be heard every practice as the Steelers warm-up in their stretch lines. Foster yells a humorous greeting to seemingly every player on the team each day, often leading chants for specific teammates at times. If this is his last year in Pittsburgh, his leadership and personality will be sorely missed. Class act, that one.

6. Waiting For Gerod Holliman to Tackle Someone

Every day I wake up wondering if today will be the day that I actually see Holliman wrap up a ballcarrier and make a legitimate tackle. He has put a shoulder into a few guys and helped out on some stops, but I’m still waiting for the real-deal, form tackle. He better hurry up and do it during the next two weeks, because I’m not sure we’ll be seeing him around here after that. Did I say that out loud?

7. Ross Ventrone Looking Like an Amish Farmer on the Sideline

Seriously, every day since his ankle injury, Ventrone is patrolling the sideline with his bushy beard and long hair underneath a white bucket hat. Obviously we wish he could be out on the field, and with his workouts progressing more and more each day, he’ll likely be ditching the hat for a helmet here soon.

It got so bad one day, Alden Darby even yelled “We’re not tackling today Wild!” at one point after Wild smacked somebody at the line of scrimmage. Also, Wild is my training camp crush, so yeah..I’m gonna miss this, I’m gonna want this back, I’m gonna wish these days…you get it.

9. Sean Spence Getting Picked On During Stretches

These dudes love to needle Spence, especially his fellow linebackers. Whether it is making fun of Spence’s Miami Hurricanes or the linebacker’s consistent heavy usage of the hurdles during stretch period every day (he loves those things), he’s constantly defending himself from a barrage of jokes and rips at his expense.

10. Someone in the crowd saying how big Alejandro Villanueva is every single day

At 6’9, 340 pounds, the awe Villanueva inspires when viewing him in person is to be expected, but I don’t think a day has gone by where Alex and I haven’t heard someone comment on it. As someone who has stood next to him and interviewed him while the man was in cleats and full pads, I completely understand the reactions. What a specimen.

11. Watching everyone from Daniel McCullers to Mike Thornton throw Reese Dismukes around like a rag doll.

Hey, I never said all of these were going to be flattering, and few have had a tougher camp experience than DIsmukes. He’s had plenty of technical and mental errors, but more than anything has just been physically outmatched by everyone, with McCullers crushing him on a consistent basis. Even Thornton, little powder keg that he is, has consistently whipped Dismukes in one-on-ones. Just been a brutal three-week beat down.

With Williams sitting out several practices now, I’m already missing this, as the linebacker never showed any regard for the no tackling rules during team periods. I’ll never forget Cameron Stingily catching a curl route in front of him, then turning around only to get smacked right in the mouth by Williams. The old-school linebacker mentality is alive and well with that one.

Seriously all he ever does….I mean try a different move, just once, please…

Sometimes you honestly wonder what button you hit to make practice go into slow motion. Than you realize that’s just Hamilton, and everyone else is still moving at normal speed.

That’s mean, and Hamilton has actually made some tough catches, but that man is not an athlete at all.

This should continue into the regular season, but it won’t be quite the same as watching Heyward-Bey drop a multitude of passes in practice despite working against air half the time. I’ve been going to camp for a long time, and I’ve never seen anything like it. Will be missed for sure.

On his pro day Doe measured at 5’7, 175 pounds, and I’m not sure he’s that big. I’ve commented to Alex on multiple occasions that I’m quite certain Doe could fit in my pocket if necessary. Doe looks like he won a “Steeler For a Day” contest out there, with oversized shoulder pads dwarfing his tiny frame. We’ll also miss his muffed punts, and the fact that we can’t turn them into an in-season drinking game when Doe gets cut. Bummer.

It is pretty funny to watch a center take on one of the best quarterbacks in the NFL in a football-throwing accuracy contest, but that is what Pouncey and Ben engage in frequently pre-practice. Pouncey even matched Roethlisberger’s performance yesterday, with several throws from 30 yards+ that hit the crossbar cleanly. A training camp staple that the crowd at St. Vincent loves.

18. Willam Gay yelling at the crowds

One guy who has come to multiple practices is absolutely infatuated with Antonio Brown, even screaming that Gay couldn’t stop him during one practice. Gay promptly turned and yelled, “Shut the ___ up!” at the guy. Not exactly family-appropriate, but humorous nonetheless. On Sunday a fan yelled, “I love you James Harrison!”, to which Gay yelled back, “Why don’t you get him a ring then?!”

19. Dri Archer and Brad Wing walking down together

People ask me why we note this at every practice, a tradition Alex started last year. Listen, it’s just a you-had-to-be-there type of thing, I can’t explain it.

Seriously, the amount of Steelers fans that have come up to Alex and I at each practice and told us how much our writing is greatly appreciated and valued has meant the world to us. I know I speak for him by saying we do what we do in order to educate and inform the fanbase about the sport and players that they love. If our ability to do that is impressive to you, consider the fact that you’re inspiration and the motivation to make it possible. For all of your kind words and contributions throughout training camp, a million thank-yous, honestly.

Now, three more of these bad boys left, let’s make them the best three practices yet.