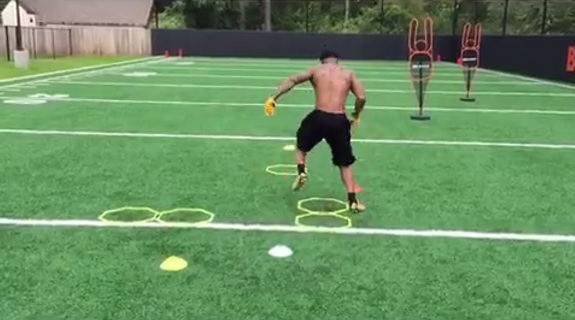 Two weeks from today, Pittsburgh Steelers cornerback Antwon Blake will be joining the rest of his teammates in Latrobe for the start of training camp but in the meantime, the former undrafted free agent is busy putting the final touches on his offseason training.

Friday, Blake posted a video of himself that includes him working on his footwork and change of direction skills. The cornerback is apparently training at the Blitz Football Camp in Houston.

Last season, Blake, who originally joined the Steelers in 2013, played a career high 290 snaps on defense in addition to being a key player on special teams. He recorded 42 total tackles during the season in addition to intercepting one pass and forcing one fumble.

That forced fumble came with four minutes remaining in the regular-season finale against the Cincinnati Bengals as he raked the ball out of the hands of wide receiver A.J. Green before ultimately recovering it. The Steelers were only ahead by three points at the time and the Steelers offense ultimately turned Blake’s turnover into a touchdown which put the game away for good.

Blake will likely enter training camp this year as the No. 3 cornerback behind William Gay and Cortez Allen. He should see plenty of playing time once the season starts in sub packages with rookies Senquez Golsen and Doran Grant both behind him on the depth chart.