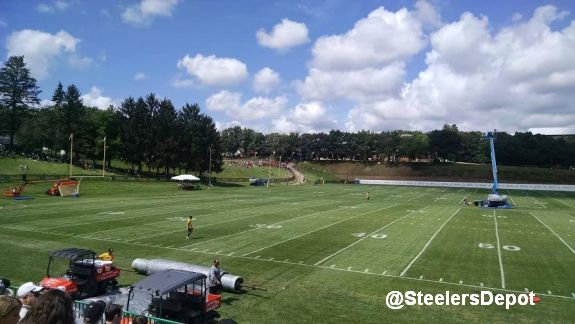 For fans of professional football in it’s grandest form, the NFL, there is nothing like awaiting the start of training camp. After all the momentous hype that builds up to the NFL Draft and envisioning your team picking out that one missing puzzle piece to a championship, the aura wears off as OTA’s and minicamps come and go, and the lull of waiting for training camp begins. However, not for much longer, as we are two days away.

This year at the small Saint Vincent College in Latrobe, PA will be a special one for the fans making the trip as the team will be celebrating it’s 50th anniversary hosting camp there. On Sunday at the team’s first practice, there will be a special on-field presentation featuring Steelers from the last five decades, including Merril Hoge, Louis Lipps, Jon Kolb, J.T. Thomas and Charlie Batch. This year, coming off the team’s playoff appearance after a two-year hiatus, coupled with the hoopla of half the half a century celebrations should figure to attract quite the crowd. Another highlight of camp is the annual “under the lights” practice held on Chuck Noll Field, which always brings out the best in the team.

Since the dynasty began in the 70s, the annual summer trip is a revelation for many, whether coming from the far corners of the continent or right around the corner in the foothills of Pittsburgh. A bonus of making the trip in addition to viewing the team practice is the luxury of some fine local eateries, headlined by my personal favorite, “Dino’s”, where if you’re lucky, you may catch a coach or some of the players grabbing some wings or a brew after the brutal heat of a mid-summer’s practice.

For some, like Ralph Calise of New York, the trip is a tradition, as he’s entering his 19th season making the trip down from the Empire State. His favorite part is the up-close and personal meet and greets with the players after practice, which often yield opportunities for autographs.

“The highlight for me was walking with Greg Lloyd, coming from the dorm area, after getting lost while walking around campus,” Calise said, according to Teresa Varley of Steelers.com. “It was my first year going there and he signed my jersey while I was walking with him.”
He also went on to cite a personal memento that he’ll cherish with him forever, as Mike Tomlin called Calise and his friend, Greg Lepani, his “Brooklyn Boys” while camping out early and waiting for autographs.
For fans like Calise, each year brings something different to the table that they can forever ingrain in their memories. For others like myself, it’s the hope of witnessing a promising team in it’s infancy as it looks to mesh and build the cohesion needed for a deep playoff trip come January and February. While many others choose baseball, allegedly “America’s Pastime” during the summer, us football fanatics are like little kids awaiting Christmas morning as we count down the days until the team reports to Latrobe. It’s an energy in the air unlike any other and it all means the season is just around the corner, and yet another chance to add to the trophy case full of six Lombardi’s.