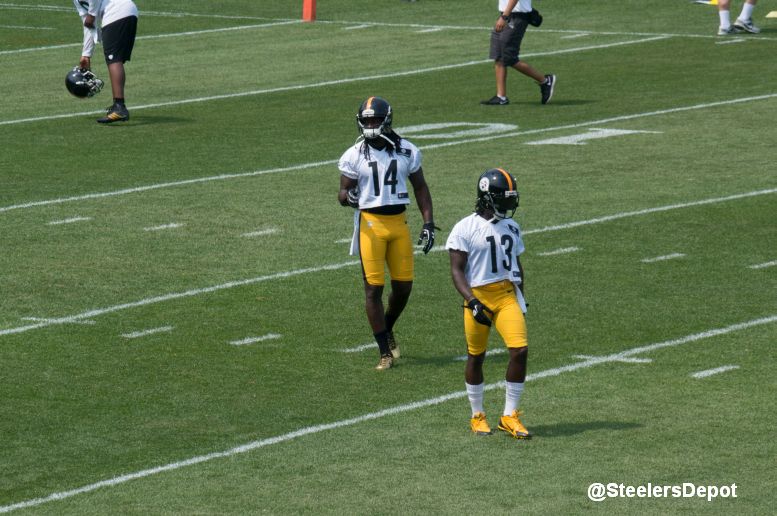 While the players enjoy their day off today, and Alex and I enjoy a break from the treacherous humidity at St. Vincent College in Latrobe, Pa, I thought I would jot down some thoughts on how the Pittsburgh Steelers rookie class has looked in their first two training camp practices.

Obviously it is incredibly early in the development process for each of these players, but I would urge you to be especially hesitant reading into the early reports on any of the front seven defensive players. Without full pads and with most players not really going 100 percent just yet, not much can be gleaned from this group’s play until Wednesday, when the practice should be full-contact. Hopefully we’ll also get to see some one-on-ones that day, one of the more exciting and intriguing aspects of camp.

Heres what I’ve observed from the rookie class through two days of practice.

Dupree’s first step was his calling card out of college, featuring an explosive burst from a two-point stance that should translate directly to the NFL. That trait has been on display during practice this week, as Dupree has consistently gotten strong jumps off the snap and even caught Kelvin Palmer napping for a would-be sack yesterday.

That said, Dupree continues to take a wide arc to the quarterback, an issue that plagued him in college. On deep drops the rush can be successful, but Dupree must learn to shoulder dip and flatten to the quarterback more quickly. His counter game was undeveloped in college, and without pads on it isn’t exactly a go-to option, but Dupree did attempt to spin back inside against  Mitchell Van Dyk yesterday. It was clear the move hadn’t had much practice, but it was good to see the young linebacker thinking through his approach and attempting to set up his rushes with a clear plan of attack.

In coverage, Dupree generally knows his assignments and has picked up receivers heading into the flat with good fluidity, but his spatial awareness still needs work. Too often he plays off his assignment and leaves an easy throwing window, when he should be playing the pocket of the receiver better and hoping to force an incompletion. Dupree also needs to get his head around and find the football, rather than face-guarding the receiver in coverage. Little things that can change his whole game if he focuses on refining them in practice.

Been a mixed bag of results so far for Coates, who has actually caught the ball pretty cleanly so far in practice. Coming into the NFL his unreliable hands and inconsistent catching technique were major concerns, and while Coates had one pass clang off his hands at the goal lineon Sunday resulting in an interception (ball was deflected too, I believe), he’s generally shown good arm extension and hand strength to snatch balls crisply away from his frame.

His routes will continue to develop in time. Coates rounded off a quick out near the goal line yesterday, which allowed Doran Grant to identify the route quickly and jump the pass for an interception. He’ll have to continue to focus on the nuances of the position, but his athleticism is obvious on the practice field. And boy is he rocked up.

Outside of Grant’s goal-line interception on Monday that likely would have went for six the other way, he’s been relatively quiet, rotating in with the second team defense for the occasional snap. Depending on how long Senquez Golson is out, Grant could see an expanded role if he performs well in preseason action.

The same issues that I had with James in college have shown up in practice, namely, a lack of suddenness to separate in his route tree. That’s to be expected some with a rookie, and he wasn’t utilized much as a receiver in the latter stages of his Penn State career, so patience will be required with James. He has caught the ball well, but needs to run hard after the catch and finish the play strong.

What I really am looking for from James is a tough guy mentality, both in the trenches and after the catch. When the pads go on, I want to see a fierce competitor who will knock defenders over and mix it up at the line of scrimmage. Those are things I didn’t see from the former Nittany Lion in college, so I want to see tenacity when full contact practice is initiated.

With Walton the issues will likely remain the same throughout the first year; he has to improve his technique and show better hand usage to stack-and-shed blockers before he is going to receive playing time. He’s a tough competitor who works hard and doesn’t mind physical play, traits that defensive line coach John Mitchell has taken advantage of in some teachable moments this week. Don’t expect a ton from Walton early on, especially when the pads aren’t on.

Snaps have been fairly sparse for Chickillo so far, as the former Hurricane makes the switch from defensive lineman to outside linebacker. He’s reportedly shed weight, and while he clearly isn’t the most athletic player on the field, he seems to be moving decently, albeit in a very small sample size. Can he develop pass-rushing traits and moves despite being a guy who pretty much just power rushed in college? Something to keep an eye out for.

Holliman has only gotten a couple of snaps in 11-on-11s and is currently rotating in with the third team safeties. With Landry Jones checking down all day, there simply hasn’t been much opportunity for the safeties to make plays on passes down the field. The real test for Holliman will come when the pads come on, provided he can earn his way onto the field for more snaps.

-I’ve mentioned before that I think Eli Rogers has had the best camp of any of the unexpected players so far. His feet and balance have been excellent when running routes, but his hands have been the real pleasant surprise, as Rogers has snagged a couple of tough throws with some zip on them. It is too early to make any definitive assessments, but I’m very impressed by his work so far.

-All the receivers have had bright moments, including Devin Gardner and Shakim Phillips. We’ll see if Gardner remains at wide receiver or if he eventually gets reps at quarterback too. For his development’s sake, I hope he remains at receiver, but Mike Tomlin’s comments have suggested he’ll get an opportunity at both positions, alternating with Tyler Murphy.

–C.J. Goodwin isn’t as explosive in his routes as Rogers or Phillips, but he can sky for the ball. I talked about his impressive catch over Kevin Fogg yesterday, but he’s made a couple of nice grabs during the first two days of camp.

-I won’t say much about the offensive or defensive lineman yet, simply too little to be derived at this point. I will mention that Alejandro Villanueva has had bad moments and good ones. His length is a real asset, but he’s got to sink his hips and establish a strong base, rather than consistently lunging and getting his chest out over his knees. Kelvin Palmer has been slow off the snap a couple times, but recovers pretty nicely with a solid kick-step. I look for guys like Kevin Whimpey and Van Dyk to make their mark in the run game when the pads go on.

-Everyone is dying to know if Tajh Boyd, or even Tyler Murphy, is out-playing Landry Jones. The simple answer is yes, I’ve been more impressed with the two young passers on a consistent basis, and Boyd has even had a couple really nice tosses. But it is very early, and until all three face legitimate pressure, it will be tough to evaluate them. Jones does seem like he’s processing faster than Boyd, but his arm talent is so minimal, and his accuracy and decision-making are still poor. Murphy has made quicker decisions than Boyd, but he’s checking down a lot, so it is tough to get a gauge on his arm.

–Shayon Green is having a tough time. Kelvin Beachum bodied him on two straight rushes on Monday, sending the Miami product flying to the turf. He’s been a non-impact presence during the first two days.