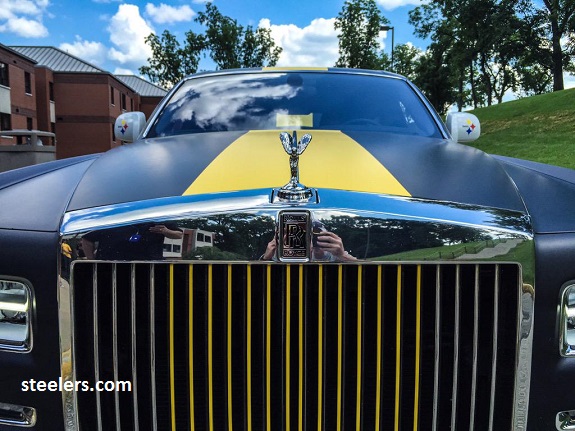 Brown, who led the league last season in both receptions and receiving yardage, pulled up to the team dorms in the backseat of his new black Rolls Royce Phantom that includes a gold stripe down the middle and his signature etched into the side. Browns’s younger brother was reportedly behind the wheel driving. Brown’s slick new ride is reportedly worth between $400,000 and $500,000 and he apparently didn’t have to pay for it, either, according Jacob Klinger of pennlive.com.

Brown signed a five year, $41.7 million contract extension with the Steelers on July 27, 2012 and while he probably feels like he’s worth much more than that following two extremely productive seasons, the former sixth-round draft pick chose not to stay away from the team’s offseason activities this year after it was originally reported he was considering it due to him possibly wanting a newer deal.

Talk about riding up in style! #wtae #Steelers #trainingcamp pic.twitter.com/ryjFu7fKY5