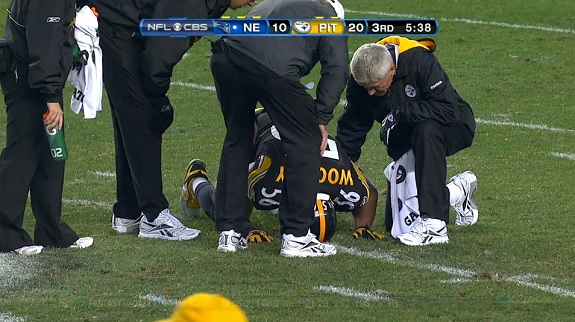 It’s Throwback Thursday time again and this week we will bounce back to the 2011 season and take a look at the play that started the decline of former Pittsburgh Steelers linebacker LaMarr Woodley.

In case you forgot, Woodley recorded 39 sacks during his first four seasons in the league with the Steelers and after initially receiving the franchise tag from the team prior to the start of the 2011 new league year, he signed a six-year, $61.5 million contract during training camp.

Woodley deserved that deal and hit the ground running in 2011 by registering seven sacks in the first seven games of the season. In the Week 8 game against the New England Patriots, Woodley registered two more sacks before disaster struck with 5:44 left in the third quarter.

On 1st and 10 from the Steelers 45-yard-line, Woodley attempted to rush off of the left side. On his way to pressuring Patriots quarterback Tom Brady, Woodley went down to the ground as a result of a right hamstring injury. He left the game and did not return. Little did we know at the time that that injury would be the start of his huge decline in play and health in addition to his eventual release from the team prior to the start of the 2013 league year.

Woodley missed the Steelers next three games after suffering the hamstring injury and when he returned to action in the Week 13 game against the Cincinnati Bengals he suffered an ankle injury that resulted in him playing in just one more the game the remainder of the season.

Over the course of the next two seasons, Woodley missed a total of eight games and when he was on the field, he certainly wasn’t the same player that he was prior to suffering the hamstring injury in 2011. He did, however, still manage to record nine more sacks during those two seasons before a calf injury suffered in the Week 15 game against the Bengals prematurely ended his season and ultimately his career with the Steelers.

It certainly makes you wonder how things would’ve turned out for Woodley had he not suffered that initial injury back in 2011 because at the time, he was certainly a force for the Steelers on defense.