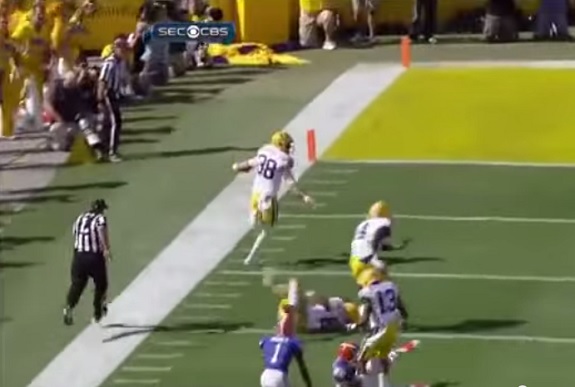 Out of nowhere Monday morning, Pittsburgh Steelers punter Brad Wing reminds us that he has a set of wheels as he retweeted a video replay of himself scampering 52 yards for an apparent touchdown in LSU’s 2011 game against Florida.

What’s forgotten here is the fact that Wing’s score was erased by an unsportsmanlike conduct call after he held the ball out toward a Florida defender on his way to the end zone. After that game, Wing talked about the penalty and you can see his response in the video below.

Last season with the Steelers, Wing actually threw two passes. One of those was intercepted during one of the two games against the Cincinnati Bengals on a designed fake. His other pass, however, came after a botched extra point attempt in a game against the Baltimore Ravens. On that play, Wing connected with tight end Matt Spaeth.

Needless to say, I doubt we see the Steelers run many fakes in 2015.

Wing is set to do battle with Jordan Berry during training camp this year.