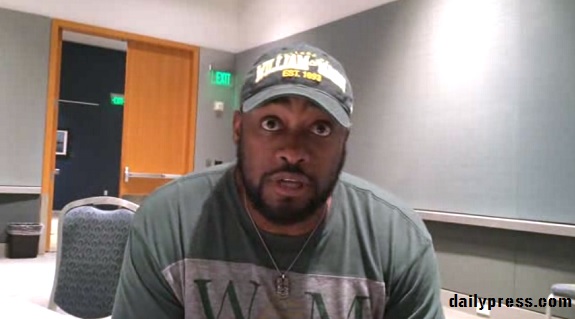 Pittsburgh Steelers head coach Mike Tomlin was back in Hampton Roads, Va this weekend heading the area’s 19th annual All-Star Football Camp. During an interview with Dave Johnson of the Daily Press, Tomlin was asked to talk about the progress being made by backup quarterback Tajh Boyd, who hails from the Hampton Roads area and who played his high school football at Phoebus.

“He’s looked good but it’s football in shorts,” said Tomlin of Boyd. “It’s the spring. Obviously, training camp and the opportunities that he’s going to be given there is going to be big for him. But really, it’s an awesome opportunity for a lot of guys like him.”

Tomlin made sure to point out that he has a few other players currently on his roster who also hail from the 757 area code.

“I’ve got some other 7-5-7 guys,” started Tomlin. “Shamarko Thomas is a young strong safety that’s getting an opportunity to step up and play defense with the retirement of Troy Polamalu. “Arthur Moats is an outside linebacker, a James Madison guy, that we had on a one-year deal a year ago and really provided great professionalism and play for us, so he’s back with us.”

Tomlin also listed cornerback B.W. Webb, who in addition to playing at Warwick High School in Newport News, Va, also played his college football at William and Mary, which just so happens to be Tomlin’s alma mater

“He’ll be given an opportunity to compete at a cornerback position,” Tomlin said of Webb.

Tomlin also revealed to Johnson that he gets kidded quite a bit for his affinity for players that come out of the Hampton Roads area. His response to that?

The Steelers will be reporting to Latrobe for training camp two weeks from this past Friday and their first official practice will be held on that Saturday.