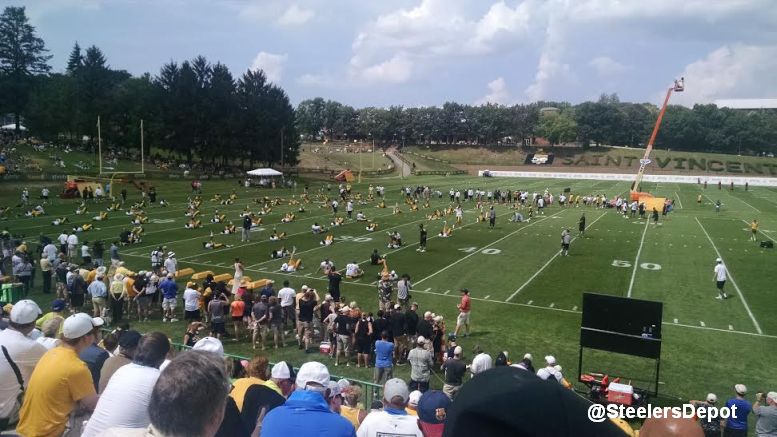 Yesterday was the first of many padded practices that we will see from the Pittsburgh Steelers while they host their training camp practices in Latrobe, and perhaps the players were a little too excited for it, because it was widely reported to be a pretty sloppy affair.

Admittedly, much of the sloppiness during practice wouldn’t be attributed directly to the fact that the players were in pads. For example, second-team center Reese Dismukes was responsible for nearly half a dozen poor snaps, according to Alex Kozora, which is not especially different whether you have shoulder pads on or not.

But it wasn’t just all on the centers, as all of Landry Jones, Tajh Boyd, and Tyler Murphy bobbled or mishandled snaps. One from Boyd came during the Seven Shots segment, which is a key loss of a productive rep in an important drills designed to strengthen the goal line offense and defense.

Kozora also notes that there were a few instances of players being in the wrong place at the start of a play, or in a play they weren’t supposed to be in at all. Of course, these and other things are all fairly standard errors that will be common to early training camp practices, and so criticism should be taken with more than a grain of salt.

It’s important to remember that the Steelers are just three practices into what is essentially the start of their 2015 season, as they are now beginning to prepare to play in actual games. And yesterday was, of course, the first time that they put the pads on since the end of last season, so it would be of little surprise if things were a little more haphazard than usual.

All that matters from this point forward is to see progress. Kozora notes, for example, that Dismukes and Boyd spent time after practice working on their exchanges, while Murphy regularly stays after practice and throws with his former college teammate, wide receiver Shakim Phillips.

This is a period of instruction, and you can be certain that this roster is getting plenty of that, especially when considering that this is one of the youngest teams from top to bottom that they have brought into training camp in many years, with the average age of their projected starters, for example, hovering between 26 and 27 years old.

There will be a natural ebb and flow in the quality of play during the preseason, not just from day to day, but even from rep to rep. this is the time when the consistency that you want to see in the regular season is being forged, and that is a process that takes time and patience to develop.

Dismukes had a rough day yesterday, as did tight end Cameron Clear. But it was just one day of many, and each will have ample opportunity to rebound. It is within their control what type of quality they end up putting on tape as they and other looks to grow from this sloppy start to padded practices.