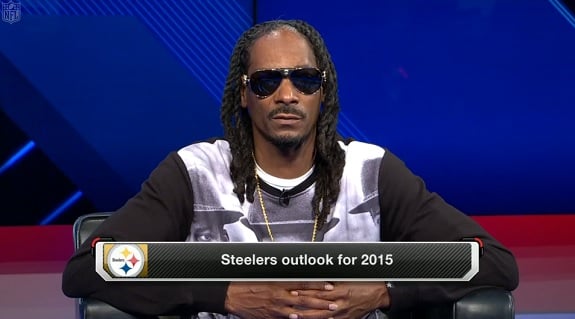 We can all rest easy now as famous rapper and Pittsburgh Steelers Super Fan, Snoop Dogg, has finally weighed in with his thoughts on the team for upcoming season during a recent appearance on the NFL Network.

“I think that the youth will give us an exciting season,” said Dogg of the 2015 Steelers. “There’s a couple of veterans that’s still there and we got a strong mentality at quarterback. “So I think we’re going to be alright. I just feel the youth has to come in there and put on a show and do what Steelers do.”

How’s that for top-notch analysis?

As most of you probably remember, Snoop posted several expletive-filled rants aimed at Steelers offensive coordinator Todd Haley last season on his Instagram account. So how does he fill about Haley now headed into the 2015 season?

“Todd is alright, man,” said Dogg of Haley. “Todd starting listening to me on Instagram. In the beginning, he wasn’t paying no attention, but when he started to listen, the offense started clicking and Ben [Roethlisberger] started doing what he do. I think he was too much trying to control Ben as opposed to letting Ben dictate. He’s a veteran, let him read and do what he do.”

While I doubt that Haley paid too much attention to Dogg’s advice, Ben Roethlisberger certainly did “do what he do” last season to the tune of 4,952 passing yards and 32 touchdowns on his way to leading the Steelers to an 11-5 record.

Later during the interview, Dogg was asked to name his top-three players currently in the NFL and after first naming J.J. Watt and Marshawn Lynch, he then chose Roethlisberger.

“I love Benji because even though we be looking like we’re not going to do anything, he gives us that hope,” Snoop said. “He’s a full-on lion in the jungle.”

Ok, consider yourself set for the 2015 season.