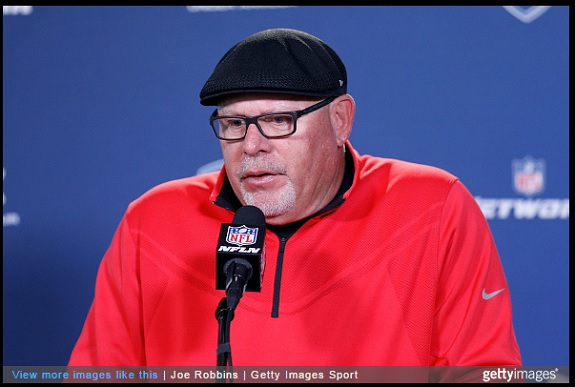 In his most recent edition of “The Schein Nine“, NFL analysts Adam Schein attempted to list the nine top feuds heading into the 2015 NFL season and he listed Bruce Arians vs. Pittsburgh Steelers as No. 6 overall.

No matter how you spin it, Mike Tomlin and the Steelers let Arians go. And now, Arians is a two-time Coach of the Year and arguably a better head coach than Tomlin. In fact, personally, I’d take Arians over Tomlin.

Arians is in a fantastic position in Arizona, but you know he still holds a grudge — and he should. Don’t think that it won’t be personal when the Cardinals visit the Steelers in Week 6. And you know what? The Cardinals are in better shape than the Steelers heading into 2015.

First, it should be noted that Schein really isn’t a big fan of the Steelers. His notion that the Arizona Cardinals are currently in better shape than the Steelers is a bit laughable, in my opinion. Sure, the Steelers defense might have a lot of questions that will need answering this upcoming season based on last year’s results and the loss of several veterans during the offseason, but the Cardinals offense has a lot of questions they must answer as well. Do any of you really expect the Cardinals offense to rival the Steelers unit in 2015? I know I don’t.

As far as him choosing Arians over Tomlin, well, outside of the Steelers former offensive coordinator being a two-time Coach of the Year, he’s yet to win a playoff game. Yes, I realize he didn’t have a quarterback last year after Carson Palmer went down, but his defense still allowed a 7–8–1 Carolina Panthers team to score 27 points in the playoffs. Just saying.

Arians has been out of Pittsburgh for several years now and while he might still have a bad taste in his mouth stemming from his departure, I doubt seriously that he has the 2015 game against the Steelers circled in a special colored ink. Additionally, Arians and Steelers quarterback Ben Roethlisberger are still very close after all this time.

Schein goes on to list the Baltimore Ravens vs. Pittsburgh Steelers as his ninth and final feud and that’s understandable. If anything, that one should be ranked higher than Arians vs. Steelers.

ETA: In case you forgot, Schein predicted last season that the Steelers would finish last in the AFC North. Thanks to Twitter follower @JoshR_7 for reminding me about this.