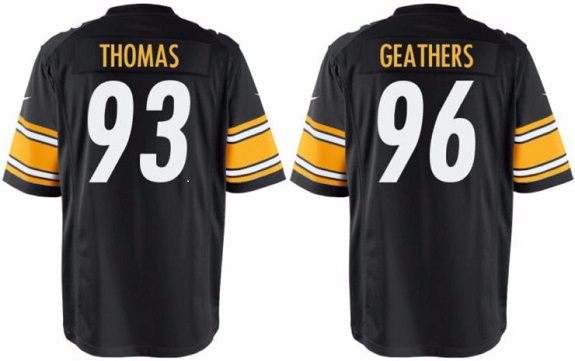 One aspect of the game, I think, that has a tendency to get underappreciated, particularly in a 3-4 defense, is the value of having quality depth along the defensive line, and the last two times the Steelers made it all the way to the Super Bowl, they certainly had quality depth behind their three mainstay starters.

In 2008, during their most recent championship season, that depth group was led by two long-time veterans, nose tackle/defensive end Chris Hoke and defensive end Travis Kirschke.

An undrafted free agent in 1997, Kirschke lasted in the NFL all the way through 2009, which is an exceptional career given where he started. Though he was only a full-time starter once in his career, the year before he joined the Steelers in 2004, he did play a vital role in Pittsburgh, starting six games in 2008, with 17 games started in total in his last three seasons.

I don’t think that I have to sell Hoke much, who was a beloved figure both in the locker room and with the fans. Hoke was signed as an undrafted free agent in 2001, the same year the Steelers took Casey Hampton in the first round, and he was Hampton’s backup from 2004 until he retired after the 2011 season. Hampton himself lasted one more year.

Hoke was forced to start the last 10 games of the 2004 season and through the playoffs when Hampton was injured. They didn’t lose a game until the AFC Championship. Throughout his career, the Steelers had an exceptional record in games he started.

In fact, he was a mentor to Steve McLendon, who is now the starting nose tackle and was just emerging as valuable depth in 2010. Of course, Hoke was still there, though at the time McLendon was playing more end than nose.

Also in the mix was Nick Eason, who played his best season with the Steelers in 2010, though he was also there in 2008. The key figure of the depth group that year, though, was Ziggy Hood, a former first-round draft pick in his second season, who started most of the season due to injury as the team posted one of the lowest rushing yards against totals in the modern era.

Of all those players named, only McLendon remains, and he is in the starting lineup. In fact, a great many questions surround the depth behind the current starters this summer, with at least two spots completely up for grabs.

The only player certain to have a spot locked down is Daniel McCullers, a second-year player who saw around 50 snaps in the regular season. He still remains a bit of a project, but his gargantuan size alone means that he has notable potential to develop.

As far as the defensive end positions available, there is a long list of contenders, though it seems that veteran journeyman Clifton Geathers and rookie L.T. Walton have been primarily used along the second-team line, which could indicate that they are currently out in front.

But that could change if Cam Thomas is kept around for his experience, both in the league and in the system. Other candidates include Ethan Hemer, who was in camp and on the practice squad last year, and Matt Conrath. Of course, the fact that we’re talking about such a wide array of candidates is a strong indication that depth is a concern here at the moment.