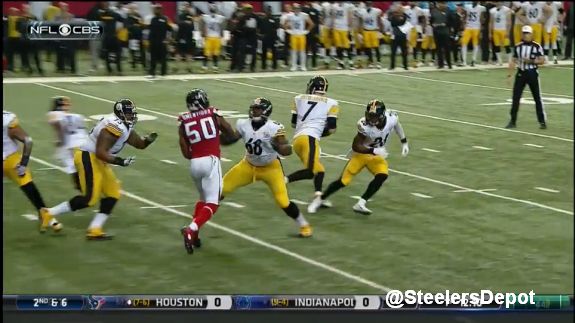 Kelvin Beachum: 2014 really was a great year for the Steelers’ left tackle. If you have the capacity to look beyond his size, and you should, he’s a franchise caliber player. He has the quickest hands on the team and when he shoots them, generates a punch that gives him more strength than you’d expect from a 6’3 frame. He plays with a solid base, aided by his built-in leverage that lets him sink his hips, unlike other tall tackles who have to fight against their size. His football IQ is unmatched and rarely does he look lost, even more impressive by the fact he hasn’t been in the NFL that long.

Though being a left tackle is difficult and sacks an inevitability, I would like to see the number he’s allowed to drop down from the seven given up in 2014. If it comes down to five, I’ll be happy.

Marcus Gilbert: He can’t get off to the horrendous start he had last year, allowing three sacks in the first two weeks. Empirically, that’s an important step. I want to make sure his technique doesn’t lapse like it did until Mike Munchak corrected it throughout the year. For him, it starts with keeping his hands high. Don’t let your arms dangle pre-snap, have them hinged and ready to shoot.

It’s painting with a broad brush but he also must eliminate the cringe worthy, turn-off-the-film plays he’s suffered through. Getting lifted off your feet and pancaked on a bull rush, flailing and doubling over as the rusher rips past you, plays where it isn’t even a competition but school-yard bullying.

And of course, stay healthy, a task the right tackle hasn’t been able to live up to in his pro career.

Mike Adams: There is a place for unabashed criticism but not here. It’s the time to be honest but constructive and optimistic. I turned on a little bit of Adams film over the weekend. It showed a player with the best strength of the lineman, with long arms who when creating space, is capable of anchoring. That’s the good.

The bad is the still consistently terrible base he plays with, always showing a forward lean, the product of a tall, heavy tackle who can’t sit in his stance. Munchak is a guru but not a miracle worker. I don’t know if this habit is something that can be broken. You can rep it all you want but when you’re thrown to the fire, when you’re against a talented edge rusher, you fall onto what you know. It’s instinct.

But if there’s something to look for, it’s that ability to sit in his stance. Additionally, he opens the gate too easily, turning his body parallel to the line of scrimmage instead of taking a 45 degree line on his kickslide. It makes him vulnerable to inside rushes and counters and due to a lack of lateral quickness, he tends to grab and hold.

Alejandro Villanueva: The darling of camp before he’s even taken a snap. That’s him in a nut shell. It’s easy to fall in love; a war veteran, a hulking frame, and according to players, one of the nicest guys you’ll meet.

But there’s work to be done. A lot. All of it, really. This dude could end up looking like Emmanuel McCray. Who knows?

There’s the obvious. Can he, like Adams, get low enough to sink into his stance, or will he struggle with leverage and constantly get uprooted by smaller (read: all of them) defenders? I’m dying for his first one-on-one with James Harrison.

The same goes for run blocking. Can he coil out of his stance, get low, and deliver a punch? This, along with every other aspect of his game, are complete unknowns.

It’ll sound like a copout but I’m looking for everything with Villanueva. Because I know nothing.

Kevin Whimpey: I’m assuming he’ll play at tackle considering the Steelers signed a guard after Micah Hatchie went down in the spring. Based off his tape, I profiled him as a guard, so I’ll be looking for his ability to move laterally and defend speed rushes. It might be possible for him to do that on the right side but I severely doubt it on the left.

He’s been lauded as a strong player, and the tape sure does back that up, and the push he gets as a run blocker will be crucial.

Remember Whimpey should be a senior in college and those guys making the jump always have it tough. If it was difficult for a second-rounder like Stephon Tuitt, it’s only amplified by a UDFA.

Mitchell Van Dyk: For starters, I’ll be interested in where he’s getting work. When he talked to me a few weeks ago, he said he was seeing time at every position but center. He’s a natural right tackler who got moved to left guard when he came into the NFL so those figure to be his two best spots.

At 6’7, he’s another tall body that will have to work hard to get low. Being a mauler in the run game doesn’t hurt any either. His best chance to make the practice squad is for Villanueva to beat out Adams, opening up a sure-fire place on the taxi squad.