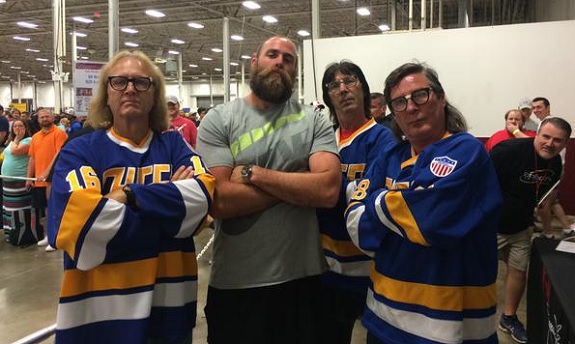 The Chantilly Sports Autograph and Memorabilia Show took place over the weekend and former Pittsburgh Steelers defensive end Brett Keisel was on hand for it as were the Hanson Brothers from the 1977 movie Slap Shot. Needless top say, the four were able to snap a few pictures with each other.

Put a pair of horn-rimmed-glasses on Keisel and he will look like he’s ready to “put on the foil.” At Greybull High School in Wyoming, Keisel was a four-year letter winner in football and basketball and also lettered twice in track. His bio says nothing about hockey, but it’s likely he’s strapped on a pair of skates a few times during his life.

Keisel, who was released by the Steelers in early March, looks close to having his beard back at full length after shearing it back in February at his annual charity event. The former seventh-round draft pick ended the 2014 season on the Steelers injured reserve list after tearing his triceps in the loss to the New Orleans Saints.

Much like the Hanson Brothers with their long hair, glasses and Johnston Chiefs jerseys, Keisel will always be recognizable as long as he has his trademark beard.