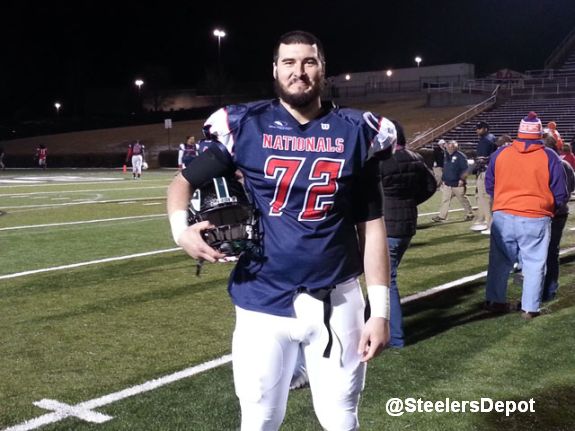 Happy to be able to set up another interview with a Pittsburgh Steeler. Had the chance to talk to offensive tackle Mitchell Van Dyk yesterday. We talk about his transition from Portland State, what playing for Mike Munchak is like, and the competition along the offensive line.

Big thanks to Mitchell for setting aside the time to talk to me.

Q: I’m sure you’ve been asked it before but you are only the fourth player drafted from Portland State since 2000. Take me back to the day you were drafted by the St. Louis Rams and what it meant for yourself and to help be one of the faces of your school?

A: It was an awesome experience. It was something I wasn’t expecting but was definitely something in the back of my mind. I had always wanted to get drafted since I was a little kid so it was a dream come true. When I heard the news, I was up in Portland with my girlfriend and I and my friends. It was one of the best feelings in the world. I couldn’t describe how I felt. I was just in shock.

It didn’t feel like I got drafted until when I got to St. Louis, it pretty much hit me when I got there, when I got to see their facilities and their area. It was definitely one of the coolest things that has happened to me in my life.

Q: You were a successful, three year starter at Portland State. Still, you were making the jump from the FCS level. If you had to focus on just one area, what was the biggest adjustment to the NFL?

A: The playbook I would say. Learning the playbook.

Q: Because there are so many more plays? Is there something about it schematically that makes it tough? Is there a specific area within the playbook?

A: Both. The load you have. With Portland State, we were a pretty simple offense. We ran a hybrid pistol offense. It was something that came really easy to me. But when I went to the Rams, it was a whole bunch of stuff I didn’t know, we never really ran. They put me at guard, I only played tackle before. So that was another reason. But now, I’m definitely catching on more now in my second year.

Q: Did you have other offers than Pittsburgh? If so, what made you want to come here?

A: I hadn’t played football for over eight months once I got cut. I only did workouts. I did a few of the workouts but never got any offers. Pittsburgh offered me right after I had a workout in January. I couldn’t be happier. If I could choose, if I had the option, Pittsburgh would be my top choice.

Q: Where have you been playing in OTAs? Has it been a lot of right tackle? What position are you most comfortable with?

A: It was at the very end of OTAs and minicamp, but I kind of have been moving around everywhere. I’ve been playing left guard, right guard, left tackle, right tackle. Pretty much anywhere the o-line coach wants me to play, I’ll play.

Q: So they’ve basically had you working at all four of those spots?

Q: Is versatility something that gets preached a lot? That seems the general feeling, the team prides itself on offensive linemen who can play 2-3 spots.

A: It’s something that comes with the territory when you’re an o-lineman. You try to be very versatile. With any other team, the more versatile you are, the more valuable you are to the team. I just have to play all four positions and be ready. Just see what happens.

Q: What’s it been like playing under Mike Munchak? What kind of demeanor does he have? Calm, quiet or will he give out tough love?

A: It’s been awesome. He’s a great coach. When he talks to us, when we mess up something, he doesn’t just tell us what we did wrong, he explains the reasons behind it. He lets us know. He coaches the rookies and the vets the same. I haven’t seen him yell at us that much, which has been nice. When it comes to coaching, it’s nice to hear what we did wrong and why we did it. And to do it this way is going to be a better option than what we did.

It’s nice to hear from a Hall of Famer. You know he knows. He’s coached at o-line, he’s done it all. When we hear it from him, we’re just like ‘Oh yeah, he knows what he’s talking about.’ His background definitely helps back up what he says.

Q: Munchak was hailed as a zone blocking guy but the team ran a lot of power, gap scheme last year. Would you call his scheme balanced or does it lean towards zone/power?

A: I would say both. It just depends on who we’re playing, what’s going on. Just depends on the situation. It seems like we run everything. It’s not really either/or. It’s a mix of everything.

Q: Is there a set weight that Garrett Giemont or Munchak want you at for camp? Or is there a range that gives you some flexibility?

A: My weight is actually wrong on the website. I talked to the guy who did the website and I told him my weight is off by almost 30 pounds. I weigh about 330 right now. I’ve been playing around that weight since I’ve been down there. They haven’t said to lose or gain weight. During OTAs and minicamp if I looked like I was out of shape, I’d probably lose weight. But I haven’t heard anything from Giemont or Munchak to lose some weight. They were actually surprised I weighed that much because I don’t look like I weigh that much. They really haven’t said anything.

Q: Where are you training during these last few weeks before training camp? Are you back home working out?

A: I’m back home in California. I just got back from San Diego. I was training down in Fitness Quest 10. I came up here just to see my family for a week before I go back down the last two weeks. So I’m training down there.

Q: Will you be there the whole time before you come to Pittsburgh on July 25th?

Q: Lot of other young lineman on the roster. Alejandro Villanueva, B.J. Finney, etc. Anyone there stand out to you?

A: All of them. It’s kind of scary. When I was a rookie, my head was spinning. I don’t know if it was the Rams playbook or just being brand new to the NFL and the system. Alejandro, Ali, he’s a war vet, stuff sticks in his memory easily. He’s big, he’s fast. All the rookies are catching onto the playbook and the system. All of them can play. We always go and hang out and talk and study. So no one really sticks out, we all stick out. It’s going to be a good camp. I feel like everyone has a shot to make the team. So it’s going to be nice to see some competition between the o-line. It’s going to a fun, cool process and I’m looking forward it.

Q: Have you ever played alongside a guy of Villanueva’s size before?

A: No, not at all. I’ve always been the biggest person. It’s weird seeing another guy bigger than me. He’s one of the coolest guys I’ve met so far in Pittsburgh.

For the few people who still use it as a source, hearing what Van Dyk should convince you not to go off of what a team’s website lists a player at. Especially for lineman, who are almost always 10-15 pounds heavier or in this case, a whopping 30.

His comments only further and highlight the need for offensive lineman to be versatile, and is definitely something we’ll be watching out for in training camp with the likes of Finney, Reese Dismukes, Miles Dieffenbach, and the rest.