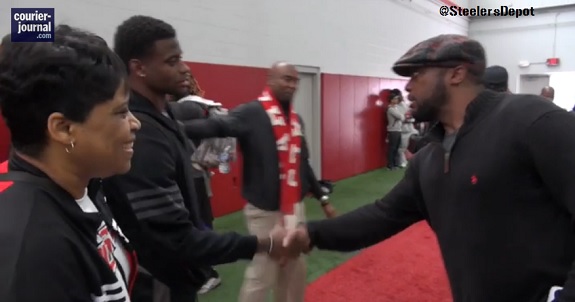 As has been widely reported yesterday, the Pittsburgh Steelers gave head coach Mike Tomlin a two-year extension on his contract, which now lasts through the 2019 season, in doing so elevating him to among the highest-paid coaches in the league.

A rookie head coach when he was signed by the Steelers in 2007, Tomlin has built quite an impressive resume for himself after serving one season as a defensive coordinator following a successful stint as a defensive backs coach.

In eight seasons, he has posted at 82-46 record, among the best records over that span, and is currently the holder of the best winning percentage in franchise history. If he sees through the life of his current contract, his 12 years of service will cement a legacy of stability for the franchise by having just three head coaches in a 50-year span, which has produced the most wins in the Super Bowl era.

But an understated element of Tomlin’s own personal legacy, I think, has been the manner in which he has gone about his job: that is, seemingly free of ego, avoiding the temptation of ‘putting his stamp’ on his team rather than seeking the path of least resistance that leads to victory.

It may have seemed like an easy decision, both in hindsight and in terms of reality, for Tomlin to retain not only the defensive coaching staff in-house, but to carry over the 3-4 defensive scheme that the Steelers have employed for so long, in spite of the fact that he himself was weaned on the 4-3, having just served as defensive coordinator over such a system.

It’s true that Dick LeBeau’s pedigree was unimpeachable, and it’s also true that the defense was at worst formidable, even following an 8-8 season, with capable personnel at all three levels of the defense, but Tomlin had to trust in his staff to lead a ship that he was less familiar with, and he did.

Not only did he let the staff do its thing, he armed them. The first two draft picks of his career were inside linebacker Lawrence Timmons and outside linebacker LaMarr Woodley, whose contributions to two AFC Champion teams were significant.

Let it not go unnoticed the significance of the fact that Tomlin chose to strengthen his defense as one of his first orders of business by drafting two linebackers with his first two picks who were clearly geared for the 3-4 personnel.

Also key was his recognition of James Harrison’s potential, who would become the Defensive Player of the Year in 2008 once Joey Porter was out of the picture. And now perhaps bringing Porter back in as the outside linebackers coach will also prove to be a prudent move.

Tomlin is a smart man, and that’s not just based on the name of the college on his diploma. He’s smart enough not to out-think himself; smart enough not to try to fix things that aren’t broken. He has the pulse of not just his players, but also his coaching staff and those in the front office. It’s been his ability to read the situation and deliver the appropriate response, more than anything, that has led him to the success that he has found in Pittsburgh.