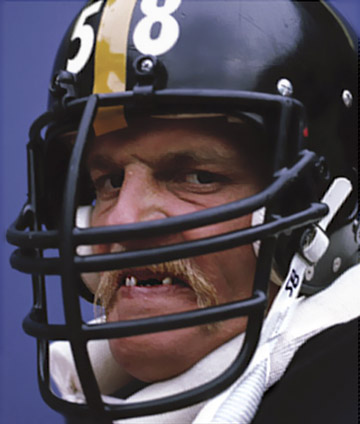 For the best off the ball linebacker, meaning inside linebackers in a 3-4 or any 4-3 linebacker, Jon makes his case for Jack Lambert. I select Andy Russell.

As a kid who dreamt of being an NFL star someday, the physicality of the game was one of my favorite aspects of football. The big hits and ferocious intensity with which these behemoths played the game was exhilarating to watch, each blow representing the burning desire to win at all costs. The fact that Pittsburgh, the franchise I grew up rooting for, was the epitome of such a violent style of football, was perhaps what endeared the team to me the most. But I don’t think any player in the existence of football embodied their team’s mindset and tenacity quite like Jack Lambert did.

Needless to say, I absolutely loved Lambert. Although I was obviously too young to have seen him play, I read every story and watched every highlight I could find of him. Talk about a guy who just didn’t care about his body or anyone else’s, absolutely nothing was as important as winning to Lambert. Until the very end Lambert hardly ever missed a game, battling through pain and every obstacle in his way to spur on an iconic defense. Missing four front teeth due to a basketball injury from high school, Lambert didn’t wear his removable dentures during games, instead opting for a savage, toothless look that only added to his legendary status as one of the most terrifying players in the game.

My all-time favorite Lambert story, and there are so many, came during the 1976 Super Bowl win over Dallas right before halftime. Steelers kicker Roy Gerela had just missed his second field goal of the game, and Cowboys safety Cliff Harris came over and patted him on the head. Sensing the intimidation tactic, Lambert flew into a rage, grabbed Harris, and slammed him to the ground. According to Lambert the referees told him that was it, he was out of the game. Lambert told him, this is the Super Bowl, you aren’t throwing me out of this game. The Steelers linebacker also said this about the moment that will live in Steelers infamy:

“We were getting intimidated and we’re supposed to be the intimidators,” Lambert said. ”So I decided to do something.”

That’s basically who Lambert was for 11 years in Pittsburgh, the ultimate middle linebacker who would take crap from no one and wouldn’t let his team be looked down on by anyone. The tall, lanky defender carried himself confidently, hit as hard as he could on every snap, but was actually a friendly, likable guy off the field.

But on the field Lambert was a terror, amassing over 1,479 tackles, 23.5 sacks, and 28 interceptions during his time with the Steelers. He had the unique athleticism to carry tight ends up the seam in coverage, while also exhibiting the toughness and physicality in the trenches to dominate the line of scrimmage.

As a leader, teammate, and linebacker, there was little that Lambert didn’t accomplish during his time in Pittsburgh. His playing style, energy, and relentless effort all over the field was the spark-plug the Steel Curtain defense needed, playing next to the quiet and cerebral Jack Ham. Was Lambert a little crazy in the head when he was out there on the field. Maybe, but this is Pittsburgh, would we have our linebackers any other way?

For the record, I didn’t have first pick. If I did, it’s Lambert and I don’t think twice. Call me delusional, chalk it up to training camp fever, but I’m going to go slightly off the beaten path with my selection of Andy Russell. This is the first time Jon and I both picked players from the 70s era. That in itself isn’t a shock but I’m sure most expected Jack Ham’s name here, not Russell.

I have to wonder: how much better would Russell have been if he had Chuck Noll his entire career? Noll helped turn Russell from a good linebacker – who did make a Pro Bowl the year before the coaches’ arrival – into a great one. Russell made a Pro Bowl in six of his eight years under Noll, the only exceptions being the first year and the last.

The linebacker came into the league on a bad team with sub-par coaching. It’s easy to forget his first year in the league came in 1963, leaving for two years to fufill military obligations. Russell went through three head coaches before Noll came into fold. Pittsburgh was mediocre on their best days, laughable on their worst.

Under Noll, the Steelers had a leader but they also had a teacher. As the linebacker tells it in Dan Rooney’s autobiography, he wasn’t happy about it at first.

“[Chuck] had not hired a linebacker coach that year. So he was not only the head coach, but the linebacker coach. He drove me crazy through the next few weeks because he really believed in technique. He got down to, ‘I want your right foot two inches outside of your opponent’s foot. I want you to reach with your right hand.’ It became very mechanical.”

Mechanical, yes, but also pivotal to his and the franchise’s success. Could you imagine what type of career Russell would’ve had if Noll had been there four seasons earlier?

Make no mistake. Russell didn’t just make the Pro Bowl when the Steelers dynasty was fully formed. Or even just when they were good. He made it in 1970 and 1971, the team combining to go 11-17.

Lambert and Ham always had the benefit of being on great teams. Not Russell. That’s what makes me want to give him the edge or at least, state a more compelling case. He was team MVP in 1968 and 1970, before the Steelers were thrust into the national spotlight. He was so durable, playing in 168 consecutive games. Lambert didn’t do that. Ham didn’t do that. Those facts get a little lost these days.

There is a small movement to get Russell into the Hall of Fame. It’s very unlikely to ever happen, not that he isn’t deserving. If it’s any consolation, the Pro Football Researchers Association elected him into their “Hall of Very Good.”

But he wasn’t just very good. He was great. And had he entered the league just a few years later, even better.