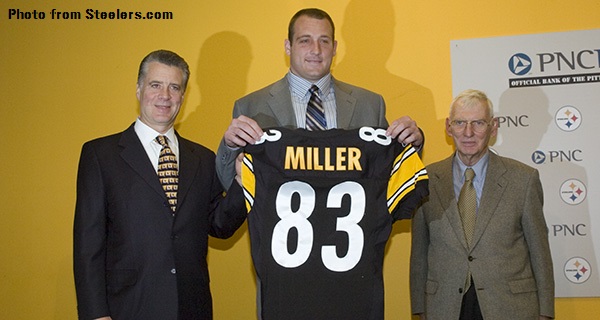 We debate the tight end spot today. Jon stays new school with Heath Miller while I go way back with Elbie Nickel.

When I say Heath Miller is the best tight end ever to don the Black and Gold, it shouldn’t exactly swivel heads. In perhaps the biggest positional landslide in this series so far, Miller’s production and impact from the tight end spot have simply dwarfed that of any other Steeler at the same position. 532 catches, 6,034 yards, 43 touchdowns, and counting put him over 200 catches and nearly 1,000 receiving yards more than the next closest tight end. And Miller isn’t done yet, with at least one more season to go in Pittsburgh’s high-octane offense.

A dedicated ironman, Miller has missed only seven games during his ten years in Pittsburgh, despite shredding his knee during the last game of the 2012 season. A remarkable recovery meant missing just two games the following year, and while Miller may not be the same player he was before the injury, he’s still quite effective as Ben Roethlisberger’s security blanket.

The only first round tight end to be selected by the Steelers since 1995, perhaps no word summarizes Miller quite like the term “reliable” does. A sure-handed target (albeit until the past season), Miller always seemed to make critical plays when the team needed them, and has owned zone coverage with positioning, timing and spatial awareness for years now. A critical aspect of being an in-line tight end without exceptional downfield athleticism, is finding voids in the defense to exploit on a consistent basis. Miller has done that weekly, always giving Roethlisberger an intermediate option to utilize in the passing game.

If reliability defines Miller, consistency can’t be far behind either. Five of his past six seasons have seen Miller go over 50 catches, with 600-plus yards receiving in four of those years as well. For the vast majority of Miller’s early career, the offense had a plethora of other options in the passing game, meaning his numbers could be even greater had he been more heavily-utilized back then.

Miller has also always been a very good in-line blocker, able to handle defensive lineman with tremendous angle play and leverage at the point of attack. The big Virginia target’s versatility is underrated, as Miller can be trusted in pass protection on the edge, and as a run blocker in space.

His versatility also extends into the passing game, where Miller is often flexed to the slot and matched up with a defensive back. Not overwhelmingly powerful or inordinately quick, Miller’s production came from his top-notch technical abilities and football IQ, a nod to the work ethic that has propelled him to elite status in Steelers lore.

Another player that was well-loved by the fanbase and well-respected around the league, few pills will be tougher to swallow for Steelers fans than the day Heath retires. From watching him bull over defenders for extra yards after the catch to seeing him snag a pass outside his frame with a defender draped all over him, Pittsburgh is going to miss Miller someday. Alex will make a valiant argument for Elbie Nickel, citing the fact that it was a different game then and Nickel’s production was impressive despite that fact, and he’ll be right – up to that point.

But when it comes to who the greatest tight end in Steelers history is, there can truly only be one choice. Miller has defined the position in Pittsburgh for over a decade now with his heart, leadership, and work ethic on and off the field. The production is there, the tenure is there, the respect and love are there from a passionate fanbase. The only thing left is your vote.

When choosing the best tight end in Steelers’ history, you have two options. Choose Heath Miller or choose to be wrong.

I’ve been tasked with the latter. So here goes nothing.

Without even factoring in eras, what tight end has the most productive season in Steelers history? Miller? You’d be surprised.

The year was 1952. The stat line? 55 receptions, 884 yards, 9 touchdowns. Miller has never reached that yardage or touchdowns. Go ahead, look it up.

If you’re into this kind of thing, who made more Pro Bowls? It’s Nickel with three to Miller’s two.

And this all came on marginal Steelers’ teams in an era where you were happy if your quarterback completed half his passes.

Consider this. In 1952, that greatest season, Steelers’ passers completed just 46% of their throws with more interceptions than touchdowns. 1953, where Nickel had another 62 receptions for 743 yards, the completion percentage wasn’t any better and their interceptions doubled their touchdowns.

Nickel was the aerial attack. Over those two years, he accounted for more than one-third of receving yards, just under one-third of receptions, and over 40% of touchdowns. He was a big play threat, finishing his career with a 15.6 yards per catch. Miller has never topped 12.5 in any season. In 1949, Nickel lead the entire league with just a shade under 25 yards per catch. Not even Mike Wallace did that.

And he, like Miller, was a Steelers’ lifer, never donning another uniform.

He never had the chance to be on a successful team. It probably meant a lot less back then but his Steelers played in just one playoff game, Nickel’s rookie year in 1947.

Be opened-minded here, Steelers’ nation. I know we toss Nickel’s era aside, a time that exists only in the front few pages of the history books – with some cheesy phrase like, “It was a humble beginning…” or whatever – but there was some good. Miller is, and given the era rightfully so, the gritty, no-nonsense tight end who acted as the security blanket for years. But compared to Nickel, Miller is new money. Born with a silver spoon in his mouth. A first round pick in exponentially progressive offense with a potential Hall of Fame quarterback. Nickel was a 17th rounder on sub-par teams that preferred to run the ball. One of his quarterbacks way Ray Evans. Yuck.

And there’s still a debate to be had which should tell you just how good he was. And why he’s still the best.