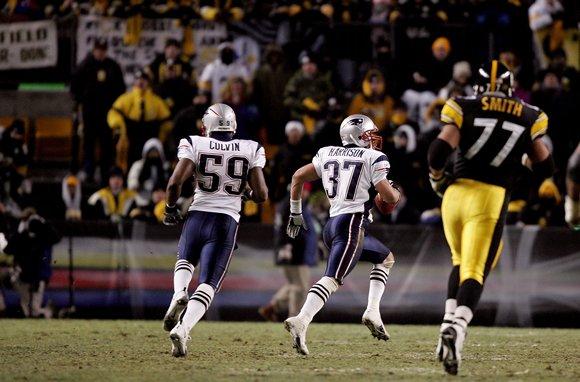 I haven’t seen many plays. Maybe I’m not the best person to answer this question. I’m only 22 and memories of the Pittsburgh Steelers from say, the first ten years of my life tend to be fuzzy. I was a Steelers fan but I loved a lot of things. I watched DragonBall Z all the time. My Disturbed Ten Thousand Fists CD was a national treasure in my eyes. My judgement wasn’t very clear.

But to answer the question without being asked, the play I would take back if I could reverse the hands of time is Rodney Harrison’s 87 yard TD in the 2004 AFC Championship game.

It’s a game I vividly remember. Watching the game, laying on the floor in the bedroom, moving to the living room when the Steelers started to lose, my irrational superstition getting the best of me.

It was such a magical season. 15-1 with a rookie quarterback. That doesn’t happen; it hadn’t happened and it hasn’t happened since. The bonkers win against the New York Jets, Doug Brien missing two field goals in the final two minutes of the 4th quarter. Jeff Reed would advance the Steelers in overtime.

It was already 17-3 in the closing minutes of the first half. Ben Roethlisberger had already thrown a pick, Jerome Bettis already lost a fumble. But the Steelers marched on and just before the two minute warning, drove to the New England Patriots 19. A touchdown would get them right back into the game, perhaps swinging the momentum their way into halftime.

87 of the most painful yards to watch later, Harrison’s score put New England in the driver’s seat. They would win 41-27, claiming the Lombardi Trophy two weeks later. The Steelers sent home to lick their wounds.

I’d love to say I took the loss like a man. I bawled like a baby. There was a Patriots fan in my class, and I convinced my mom not to go to school the next day.

The season wasn’t supposed to end that way. Big Ben was supposed to hoist the trophy, a rookie getting to touch silver, capping off an undefeated season. Champions always get their place in the history but this would’ve been a special place in that group. Instead, outside of Pittsburgh, it’s largely forgotten.

I don’t know if the Steelers would’ve won that day. Maybe they still lose. After all, the Patriots always had the Steelers’ number, Pittsburgh’s kryptonite in the playoffs. But 2004 saw the Steelers beat those daunted Pats in the regular season.

It was supposed to happen again.

Until Rodney Harrison took it away.