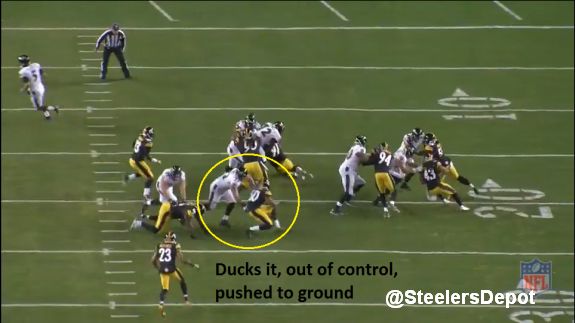 At this same time last year, Pittsburgh Steelers inside linebacker Ryan Shazier was getting ready to report to his first training camp after being selected by the team in the first round of the draft. At that time, he was on schedule to be the starter alongside Lawrence Timmons and several analysts believed he might even be a legitimate candidate to win the annual Rookie of the Year award.

Early-season injuries, however, resulted in the Ohio State product only playing in nine regular-season games of which he started just five and his rookie campaign ended with him being a role player on defense and special teams on his way to registering just 36 total regular-season tackles.

Now that he’s back healthy, Shazier is once again expected to be a starter inside and his position coach, Jerry Olsavsky, believes he can keep his young player on the field and out of the trainer’s room in 2015 if he heeds some of the advice given to him during the offseason.

“Well, when I talked to Ryan he was disappointed with last year, not playing a lot,” said Olsavsky several weeks ago, according to Bob Labriola of steelers.com. “He has to realize it’s a different game than college, and he’s not head and shoulders above everyone athletically. There are a lot more people closer to him in terms of ability. So we’re working on things, keeping his legs clean. He got hurt because he got rolled-up twice. If you don’t get rolled up, then you don’t get hurt.”

If you are a regular listener of our podcast, you’ve probably heard Alex Kozora and I discuss Shazier and his need to keep his legs cleaner this upcoming season. While that task sounds easy, Shazier might have to wade through a lot of trash this upcoming season being as new defensive coordinator Keith Butler has hinted we could see more one-gapping by the front than we have in previous seasons. Should that ultimately be the case, the Steelers inside linebackers could face more obstacles at the second level in the form of offensive linemen on their way to making plays.

Shazier can certainly cover a lot of ground with his speed and athleticism, and even though he only played 260 total snaps as a rookie, that was more than enough to get him used to the speed and quality of competition that he now faces in the NFL. If he can keep himself healthy this season, Shazier very well could be one of the team leaders in total tackles.