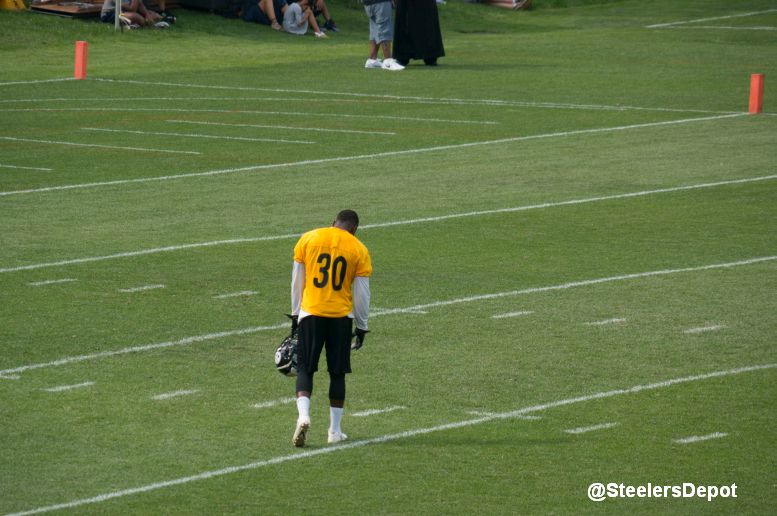 We have another Pittsburgh Steelers’ interview for you. Was fortunate to have the chance to talk to cornerback Kevin Fogg, a player who made some waves in the spring and has carried it over into training camp, intercepting a pass on the first day of camp.

Thanks again to Kevin for taking the time out of his off day to chat with me.

Q: It’s been two days of camp, how would you evaluate yourself?

A: I think everything is going well. I know there’s still things I need to improve on, as every athlete should always say that. But I’m liking how things are going. I’m excited just to be back here. Be among a great organization with the Steelers. I think that’s the most important thing. Just doing what I can for the team. So it’s been cool, it’s been fun. Exciting.

Q: Anything particular you’re trying to get better at?

A: It’s really just focusing in on technique. Technique and being able to do well in footwork and play the ball better. I think that’s another thing I can definitely work on. Just making everything a great transition.

Q: What’s the feedback been like from the coaching staff?

Q: Take me through what happened on the INT you had Sunday.

A: I had one receiver. [C.J. Goodwin] actually. I like going against him because we have good competition. One-on-one receiver and just playing my man technique. I just looked and saw the ball coming. It was pretty cool. Trying to capitalize and actually pick the ball off.  Just trying to make a play. But it was cool. Great way to start off camp. It was fun. It was exciting.

Q: What’s the most important lesson you learned from Carnell Lake?

Q: You spent about a month with the team last year. Any noticeable differences under Keith Butler from Dick LeBeau?

A: I can’t really say because I wasn’t truly with the team very long last year under Dick LeBeau. So I can’t truly say.

Q: Any truth to the reports you’ll be running more Cover 2 this year?

A: I think the scheme is pretty much how it has been. I don’t think there’s been a huge difference.

Q: You saw time in the slot Monday. Did you have any previous experience there?

A: I have a little experience. I don’t have too much experience. At Liberty, I ran a bunch on the outside at corner. But I have a little bit on the inside. But I know once I am able to hone in on what I truly ave to key, things will be a lot better for me as I try to play that position. It’s cool. It’s a great position. It’s a money position, for sure. Just knowing what you have to do, knowing what you have to key. With that, you have to get the reps. I’m glad I’m getting the reps because that’s going to help me get better at.

Q: What wide receiver has impressed you the most?

I definitely like C.J. Goodwin. And Eli Rogers. He’s great as well. I’d say those are the two I really like that are the younger guys. Of course, you have your starters, they’re great and very talented, but those would be the two I like.

Q: Goodwin had that catch over you on Monday.

A: I didn’t jump. That was all me. So we’re one and one right now. Because I got the one against him on the first practice and he got one [Monday]. I just love competing, whoever it is. I just love being out there period.

Q: You’re in pads Wednesday but has the coaching staff said if it’s going to be full-contact, tackling?

Q: This is your first training camp in Latrobe. What’s been your impression of SVC? The environment, the crowd.

A: I think it speaks to what the organization is. It’s great. The organization is great. The fanbase is amazing. It’s been really cool. To leave here and go down south to Virginia and North Carolina where I am from, to see the fanbase down there just shows the importance of the people who are on the team. Because I don’t think I am just because I am very low-key but it’s been cool. The facilities here are amazing. It’s a blessing. To be here and a place like this, it’s been a very good experience so far.