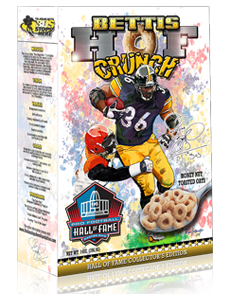 Needing some cereal and want to help support a charity foundation belonging to soon-to-be Hall of Fame running back Jerome Bettis? Thanks to Bettis and PLB Sports, you can now accomplish both of those things.

According to WPXI-TV, Bettis will be introducing the Bettis Hall of Fame Crunch cereal this coming Monday at his North Shore restaurant, Bettis Grille 36.

The cereal, which reportedly be available exclusively at all participating Giant Eagle stores and online at www.thebus36.com, is being billed as a honey nut-toasted oats-type and it is being packaged in a 14-ounce limited edition collector’s box, which features a custom illustration of the former Steelers running back.

The picture of the box shows Bettis plowing through an attempted tackle of a player wearing colors similar to those of the Cincinnati Bengals.

A portion of the proceeds from the sale of the cereal will reportedly benefit The Jerome Bettis Bus Stops Here Foundation, which is dedicated to improving the overall quality of life for troubled and underprivileged inner-city youth. You can visit the foundation’s website here.

Bettis will be inducted in the Pro Football Hall of Fame as a member of the Class of 2015 on Saturday, Aug. 8, and the Steelers will play the Minnesota Vikings in the annual Hall of Fame game the following night.

I doubt that former Chicago Bears linebacker Brian Urlacher will be buying a box.