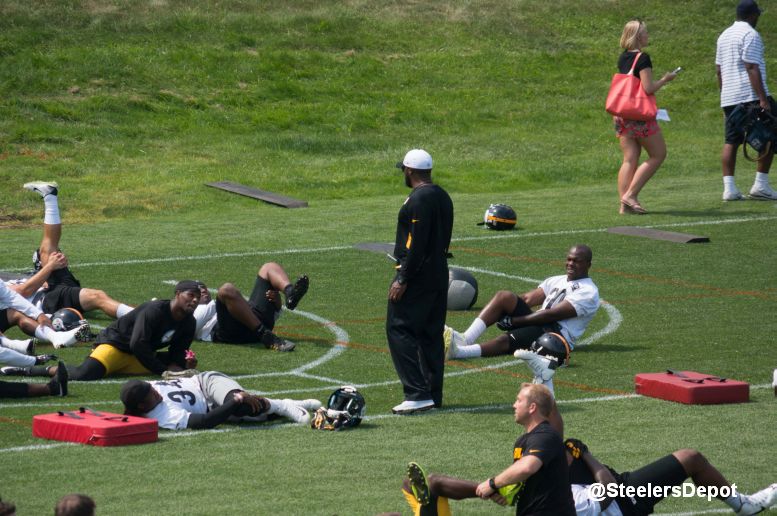 With the Pittsburgh Steelers donning the pads for consecutive days for the Wednesday and Thursday practice sessions up at training camp, it came as no surprise that head coach Mike Tomlin was liberal with his doling out of days off, or at least partial days off, for certain veteran players.

When it comes to the defensive side of the ball, there are only two really notable veterans to speak of who are over the age of 30, and Tomlin has yet to allow them to even go through drills. Those two players are, of course, James Harrison and Will Allen, who have mostly watched from the sidelines for the first four practices, with Tomlin telling reporters that he is protecting them from themselves.

Two other defensive players joined them on the sidelines yesterday, though they had some minor injuries that likely kept them out of work on the day for monitoring purposes, and not with anything that should be concerning. Those two were Cortez Allen, who Tomlin said would practice tonight, and Mike Mitchell, who might get another maintenance day.

The two over-30 tight ends are at a point in their respective careers in which maintenance is equally important, if not more important, than practice reps, so this strategy certainly strikes me as sensible, especially with the pads on.

As we saw, neither quarterback Ben Roethlisberger nor wide receiver Antonio  Brown did a great deal of work today in drills, even if the latter, at 27, really doesn’t need all that much rest. And yet he still managed to outwork everybody on his own working on the sidelines.

While it’s important to monitor your veteran players in order to keep them fresh and to not overwork them during the hot summer days, there is more that goes into the decision to give a player a day off than just that. It’s also often about the player who is filling in for them at practice.

Tomlin talked about just that after practice yesterday regarding all of the extra snaps that were given to Landry Jones, who got the chance to work a lot with the first-team offense with Roethlisberger sitting and Bruce Gradkowski still sidelined with a shoulder injury.

Unsurprisingly, the Steelers also happen to have a lot of young tight ends that they need to get a good look at during the summer as they look for a new number three tight end, and perhaps one that can succeed either Miller or Spaeth in the near future. Keeping one of those two out every once in a while gives the younger tight ends more, and higher quality, opportunities.

But there’s also the other side of the aisle, as there are several young starters, particularly on defense, who have a lot to prove, and that may well include displaying the ability to play through injury, as Keenan Lewis did in 2012 while trying to hold off Allen for the starting job. Balancing the needs of the player versus the group in distributing days off is an underappreciated aspect of coaching during this time of year.