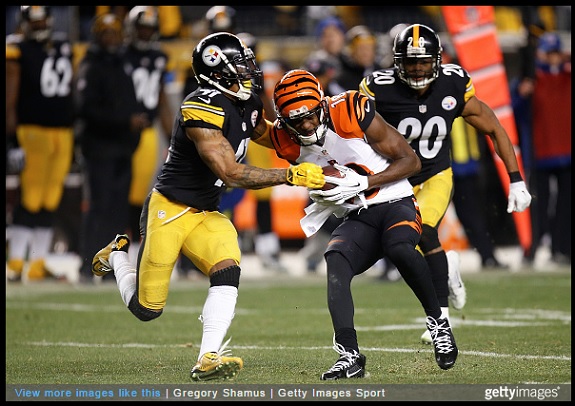 In the latest AFC North Q&A on ESPN, the beat writers were asked to name the best wide receiver currently in the division and Hensley chose A.J. Green of the Cincinnati Bengals over Brown. His reasoning? Green doesn’t have an accurate quarterback.

“Green’s production would be significantly better if he were catching passes from a more accurate quarterback,” wrote Hensley. “Before last season, Football Outsiders indicated that Andy Dalton hit Green in the chest less than 45 percent of the time (the league average was 50 percent) and Green caught 38 percent of his passes on throws above his neck. You can make an argument that Green is the most gifted receiver in the NFL.”

Green is a very talented wide receiver and he has made a few amazing catches over the years that have made quarterback Andy Dalton look good. However, Brown shouldn’t be penalized by Green’s needing an asterisk and that’s exactly what Hensley is doing. Wide receivers don’t just lead the league in catches and reception yards by accident, Jamison. Also, as you can see below, Brown makes himself an easy target by getting so wide open. Perhaps Green can learn from that.

Well, at least the other two AFC North beat writers got it right.