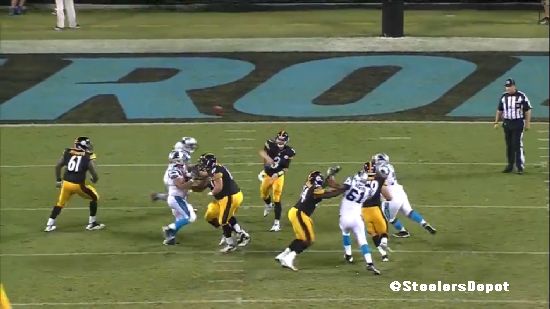 The Pittsburgh Steelers more or less knew what they were getting when they signed quarterback Bruce Gradkowski to a three-year contract during the 2013 offseason. What they were less certain of was what they would be able to get out of Landry Jones, whom they drafted in the fourth round of that same year as they looked to turn over their quarterback meeting room.

Certainly, the two moves coincided. Gradkowski would be the new backup, and presumably the bridge to the next backup, which all indications suggest that fully intended to draft that year, as their decision to trade back into the fourth round makes plain.

The hope was that, by the end of Gradkowski’s contract—if not sooner—Jones would display the ability, or at least the upside, to take over the role of Ben Roethlisberger’s backup, but that certainly has not been the case thus far after two and a half offseasons.

This spring, Gradkowski developed some sort of unspecified shoulder ailment that kept him out some during OTAs. While indications don’t point to a serious issue, he was placed on the PUP list to begin training camp, and recently intimated that it will be a couple of weeks before he is likely to be back.

In truth, the Steelers have not had much need for a backup quarterback since these two faces have been around. Gradkowski has played a total of 10 snaps, seven of which came in the last few minutes of a blowout victory, while Jones has yet to dress for a game.

The front office expressed interest in adding competition to the quarterback spot this offseason, and in an effort to do so, they signed Tajh Boyd, and then added Tyler Murphy and Devin Gardner as undrafted free agents after the draft, the latter being claimed off waivers.

Murphy and Gardner were college quarterbacks attempting to convert to wide receiver at the NFL level, which is how teams were evaluating them. The Steelers had other ideas in mind, and have worked both of them at both positions.

In essence, they have six quarterbacks, and it was thought that it would be quite hard to find them reps, but with Gradkowski sidelined and Murphy and Gardner only splitting time at quarterback, the Steelers may have a decent opportunity to get a look at what they have behind Roethlisberger.

Jones has been taking the second-team reps thus far, rotating with Boyd, while Murphy and Gardner figure to rotate by the day as to who gets the droplets of water that remain for the fourth-string passer.

The biggest benefit of Gradkowski’s injury is that we are getting a nice, long look at Jones, as he is being given plenty of reps, some with the first-team offense. At the very least, at the end of the process, we should have a far clearer answer as to whether or not he can be developed.

If the answer turns out to be in the negative, then the possibility opens that the Steelers can move on, either from Jones or from carrying a third quarterback on the roster. Boyd, Murphy, and Gardner all figure to have a bit more versatility in other areas if they are all equally poor passers, so one of them could be kept on the practice squad.