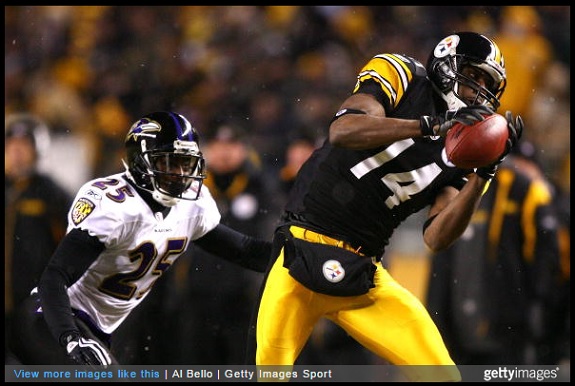 Once upon a time, the Pittsburgh Steelers had their faithful fan base in an uproar, as the team seemingly had a gift wrapped present slide to them in the second round of the 2008 NFL Draft in the form of wide receiver Limas Sweed, hailing from the University of Texas. A size-speed specimen at 6-foot-4 and 212 pounds with deep speed, Sweed looked to be a hot commodity entering the draft, with some reports of him in the first round conversation.

A standout at Texas, Sweed broke former Longhorns’ great Roy Williams’ record for consecutive games with a touchdown pass, with seven. His junior year was without a doubt his best, posting 46 grabs for 801 yards and 12 scores, all from a new quarterback in Colt McCoy.

“I think he gets overlooked a lot because he’s a great receiver — he has such great hands,” McCoy said, according to NFL.com. “When we have running plays, anytime we make a big play, it’s because Limas is down there making a block.”

A wrist injury his senior year dampened his draft stock, but it didn’t keep the Pittsburgh front office from putting him in the black and gold. An ideal fit Sweed was, not only in terms of talent but also to fulfill the wishes of quarterback Ben Roethlisberger, who’s been on record previously asking the front office for a large, physical presence at the receiver position. After the draft, all the analysts loved the pick, including ESPN’s Todd McShay.

“10 years from now, we’re going to say Limas Sweed was the most productive and most talented wide receiver in the 2008 NFL Draft class,” McShay said, according to Evan Berkowitz of The Daily Texan.

However, his rookie season was anything but spectacular, with only six catches for 64 yards. Sweed’s production paled in comparison to that of another second round receiver that year, DeSean Jackson, who despite going to Philly two picks earlier, posted 62 grabs for 912 yards and two scores, not to mention adding an electric element in the return game. In the playoffs, where the slightest mistake can send a team home early, Sweed’s misfortunes were put on display, as he dropped a walk-in bomb of a touchdown from Roethlisberger in the 2008 AFC Championship versus Baltimore. I was at this game and he absolutely roasted the defensive back, but his hands must’ve forgot to get off the bus with him.

As Sweed struggled to make an impact, he ultimately tore his Achilles’ tendon, and basically his Steelers’, and NFL, career. He had numerous other tryouts after being waived, but failed to latch on anywhere. Like many other burnouts in the league, he looked north of the border, to the CFL, where he was signed by the Saskatchewan Roughriders, but he never made it on the field, as he left the team due to a family emergency.

“The media never really knew, but my daughter’s mama had thyroid cancer,” Sweed said, according to Berkowitz. “That’s why I left Canada. I needed to be there for my family. It was unfortunate, too, because they won the Grey Cup. I would have had the three major championships.”

This is alluding to the national championship he won at Texas, and the Super Bowl he won with Pittsburgh in 2008.

Now a coach at Chapa Middle School near Austin, TX, Sweed, who’s now 30, feels at peace with his current role in being a mentor and helping lead youths down the right path.

“I like coaching these knuckleheads,” he said, according to Berkowitz. “I’ve been there and know what it takes. It allows me to see my children as needed and watch them grow up and not miss out on their lives.”

However, Sweed still has some regrets or misfortunes about his playing days, but all-in-all, the cards fell as they did.

“I can still play, man; I can still play,” Sweed said, referring to his injuries. “I think every athlete wants to play until they’re about 75 anyway, but I’m extremely grateful for the opportunity that I had and the chance to be on a great team that made it to the Super Bowl; it was all a blessing.”