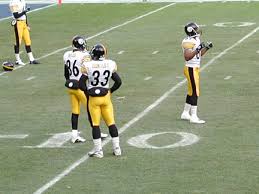 Have stayed with players in the mid-late 2000s for most of the series so I wanted to turn the clock back a little bit further today, and with a player who did more than grab a cup of coffee with the team.

Our selection today is the burly running back Richard Huntley. Joining the Steelers in 1998, he rushed for nine touchdowns and caught X passes. He had a fine 1999 season, averaging 6.1 yards per carry, catching 27 passes, and returning 15 kicks.

What I, and probably several others, will always remember him for is scoring the final touchdown at Three Rivers Stadium, a 30 yard rumble in a 24-3 win over the Washington Redskins on December 16th, 2000.

Not a bad way to go out, Three Rivers. While we’re on the subject, here’s another video showing the final snap, a Kordell Stewart kneeldown, followed by the ensuing celebration.

That would be Huntley’s final year in the Black and Gold. Statistically, 2001 would be his best season, rushing for over 600 yards with the Carolina Panthers.

He would eventually be inducted into Winston-Salem State’s Athletic Hall of Fame.

Richard Huntley, your blast from the past.