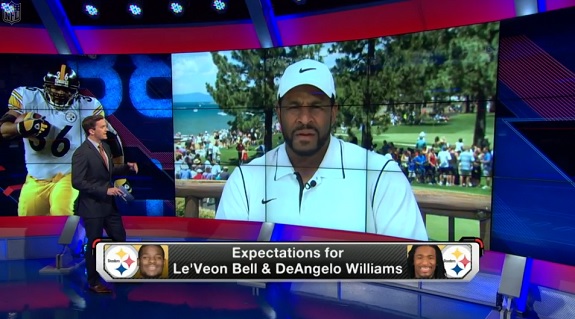 The Pittsburgh Steelers are currently set to be without the services of starting running back Le’Veon Bell for the first three games of 2015 season due to him being suspended by league and on Friday, soon-to-be Hall of Fame running back Jerome Bettis chimed in with his thoughts on how the loss of Bell might affect the offense and what they need to do to compensate for his loss until he returns.

“Without Le’Veon Bell, that a tremendous loss,” said Bettis in a recent interview from the American Century Classic in Lake Tahoe on the NFL Network. “We saw what type of team they were without Le’Veon Bell in the playoffs. You become one-dimensional. You’re just not as good of football team without having Le’Veon Bell there.

“So, they’re going to have to go running back by committee just to try to create some of the production at that position, because the one thing that you can’t do is put Ben Roethlisberger in a position where the defense is just pinning their ears back and going after Ben. He’s an incredible football player, but you don’t want to put that much pressure on Ben because those three games could be very vital in the playoff chances for the Steelers. So they need to get some productivity out of the running back position.”

It’s hard to argue with Bettis’ analysis and the Steelers will indeed likely need somewhat of a committee approach at the running back position early in the season until Bell’s suspension is over. That committee is expected to be led by veteran DeAngelo Williams, who was signed early on in the offseason. Additionally, young running backs Dri Archer and Josh Harris are also slated to have increased roles in the Steelers offense until Bell returns. Last season, the two combined to produce just 79 yards on 26 total touches during the regular season and 45 yards on 15 total touches in the playoff loss to the Baltimore Ravens.

While Williams is a do-it-all kind of running back, he only carried the football more than 20 times in a game just 11 times during his nine seasons with the Carolina Panthers. Bell, on the other hand, has already accomplished that feat 10 times during his first two years in the league in addition to catching 128 passes, which is just 50 less than Williams has registered in his long career.

In short, Archer and Harris have to step up and produce for the Steelers until Bell returns.