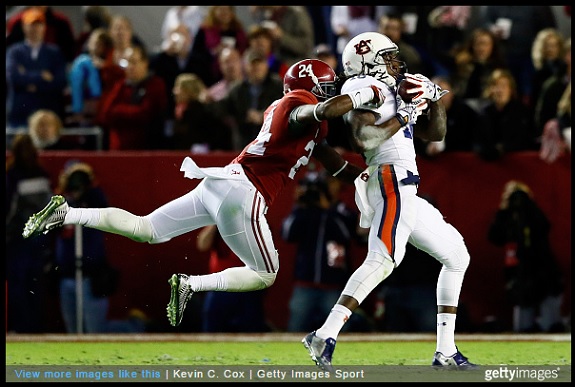 During a recent interview on steelers.com, Pittsburgh Steelers rookie wide receiver Sammie Coates said that his 206-yard performance against Alabama last season is currently his proudest football moment/memory of his young career. With that being noted, I thought we’d go back at look at his performance in that game.

For starters, Coates’ night didn’t start off all that great as he dropped a sure touchdown pass from quarterback Nick Marshall on 3rd and goal with Auburn down 14-3.

I have two gifs of that play below.

The next pass that came Coates’ direction also fell incomplete and it looks like Marshall is to blame for that one.

Coates’ first reception in the game came with time winding down in the first quarter. On that play, he showed great awareness as he came back to bail out a scrambling Marshall. The 3rd and 10 reception moved the chains for Auburn and the drive ultimately culminated with a field goal.

With just over 10 minutes remaining in the first half, Coates really came alive as he hauled in a perfect 34-yard pass from Marshall in the end zone. On the play, the Alabama outside cornerback got caught watching the in-breaking route and as a result, Coates easily gained separation over the top for the score.

Coates hit pay-dirt again late in the first half after running right past the Alabama cornerback down the right side. Nothing fancy, just an old fashion foot race that culminated in a 68-yard touchdown.

With less than a minute remaining in the first half, Coates registered yet another explosive play. This time, however, he really had to earn it as the underthrown pass from the wide receiver on a trick play required him to adjust with the ball in the air. One more yard and he would’ve had his third touchdown of the game.

Early in the fourth quarter, the Alabama cornerback makes a nice play on a pass intended for Coates. The ball does, however, appear to hit Coates in the chest and this is probably one he wished he had back at the time.

Coates got back on track quickly with another explosive play midway through the fourth quarter. This time, he had the Alabama defender by a step on a post route and made a nice catch with the player arriving shortly after the ball did.

Coates nearly had another touchdown a few plays later even though the Alabama defender made a nice play on the underthrown pass. After the initial deflection, the ball bounces right off of Coates’ hands and chest.

With time running out in the game, Marshall again tried to hit Coates in the end zone but his high pass would’ve been tough for a even Odell Beckham Jr. to come down with.