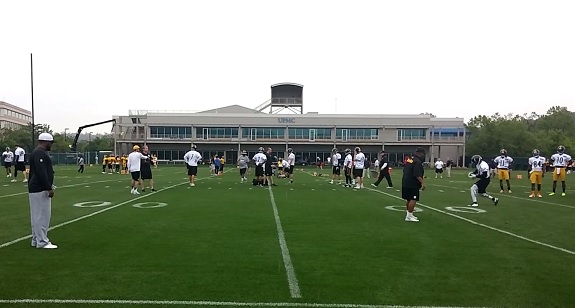 Once upon a time, we were told that the Pittsburgh Steelers offense, led by a younger Ben Roethlisberger, was fortunate to have the opportunity to sharpen itself against one of the best defensive units in the league during every practice. The reasoning was that if they could best their own defense, they should be more than prepared to handle whatever most other teams could throw at team.

Flash forward a half-decade or so, and now we find ourselves in the opposite situation; it’s now the defensive unit in the fortunate position of having the opportunity to test itself against one of the better offensive teams in the league, finishing last year second in total yards and seventh in points scored.

It’s funny how things can reverse course like that. But it’s also not surprising. For so many years, the Steelers had the luxury of relying upon a veteran defensive core that held the team together and helped lead the charge to the postseason on a near-annual basis. But those veterans have grown old, and nearly all of them have lost the race to Father Time already.

Now it’s the offensive side of the ball that has established a young core of veterans behind Roethlisberger, with All-Pros at wide receiver, running back, and center, with budding Pro Bowl-caliber players smattered throughout the rest of the starting lineup.

With the defense playing at such a high level for so long, it was difficult to make the argument of investing too heavily in a unit for which it would be a tall task for anybody outside of the first couple of rounds to make the roster.

Of course, a couple of high-round picks that have either never panned out or burned out in recent years may have set things back a bit—imagine, for example, if LaMarr Woodley was still on this team and playing at a high level—but the defensive side of the ball has largely been reloaded now with young talent.

Now it’s time to sharpen that steel, using some metallurgical magic to grow this young defensive unit into on that has the potential to become among the best in the league once again. And part of that process will include them collectively beating their heads against the brick wall that is their offensive counterparts.

In reality, the offensive and defensive lines should have some good scrums, as both are full of young, talented players. The real positions to watch do battle will be the wide receivers against the secondary, particularly the cornerbacks. Anything Antonio Brown and company can do to get that unit prepared for the season should earn at least a thank you note and a fruit basket.

Perhaps one day, hopefully soon, the two sides will grow together, even pull even with one another. The competition will be fierce on a daily basis, and the team will only be that much better for it. But there’s still a lot of work left to put in before that can become a reality.