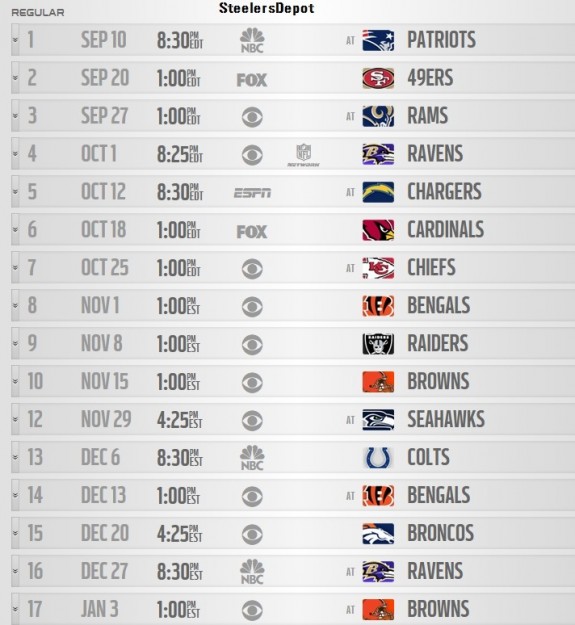 When the Pittsburgh Steelers’ list of 2015 opponents was handed down in late December of last year, it was revealed that their new slate of match-ups would be the toughest in the league based off of teams’ 2014 records. That obviously isn’t an exact indicator due to offseason changes, free agency, and the draft, but it still gives a good idea as to just how hard the Steelers path to the playoffs will be this year.

That schedule, while still incredibly daunting, has proven a little lighter on paper as time has passed this spring.

Initially it looked as if Pittsburgh would have to face the defending Super Bowl Champions with Tom Brady at the helm in Week 1, but the quarterback’s role in DeflateGate has him presently suspended for four games to start the 2015 campaign. Even if Brady is to get his suspension reduced, it likely would still carry the consequence of at least one game, giving the Steelers the chance to face either second-year quarterback Jimmy Garoppolo or recently-acquired, journeyman passer Matt Flynn. While both may be capable options, neither are close to as difficult a defensive task as stopping Brady to start your season.

Even in Week 2, when the San Francisco 49ers may have looked like a more troublesome opponent back in December of last year, has become a bit less hazardous for the Steelers. A slew of retirements have peppered the 49ers once-loaded roster, as key players and leaders linebackers Patrick Willis and Chris Borland, offensive tackle Anthony Davis, and defensive end Justin Smith all decided to hang it up this offseason. Running back Frank Gore, wide receivers Michael Crabtree and Stevie Johnson, guard Mike Iupati, and Chris Culliver and Perrish Cox have all left for greener pastures in free agency as well. One of the worst offseasons for a team in recent NFL history has left the 49ers searching for answers, and the Steelers licking their chops.

Does a Week 3 road date in St. Louis look scary with Nick Foles at the helm? A pair of Cleveland Browns match-ups? I’d mention the Oakland Raiders too, but we all know how that typically goes…

Don’t get me wrong, if the Steelers can blaze their way through the warpath of their 2015 schedule, it will absolutely still be a monumental accomplishment. A Weeks 12-16 gauntlet of games at Seattle, Indy at home, at Cincinnati, hosting Denver, and then traveling to Baltimore is enough to get the attention of even the most formidable of teams.

But the Steelers have the chance to start fast and get out to a strong early record this season, when they have typically struggled to play their best football. Mike Tomlin and staff have done a nice job of getting the Steelers to reach peak performance over the second half of their season the past few years, which should prove advantageous when working through that slew of difficult games.

It is still one of the league’s more trying schedules, but certainly not too great a task for the Steelers to handle if they can stay healthy at key positions.