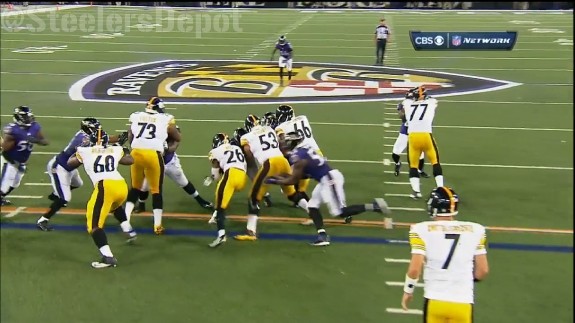 There is no denying that the Pittsburgh Steelers offense took major strides forward last season, gaining more yards and scoring more points than they have been able to in recent seasons. The Steelers finished second in total yards and seventh in total points during the 2014 season en route to their first division title in four seasons.

There is also no denying that this uptick in production largely coinciding with significant growth shown from the offensive line unit, the current  incarnation of which just completed its first full season together (Kelvin Beachum was a reserve for the first four games of the 2013 season).

But there is still one major frontier that the offense as a whole, and the offensive line in particular, must conquer in order to take the next step forward to becoming an elite offense that could potentially carry a team through a deep playoff run, and that is getting better play down in the close quarters of the red zone.

Last season, the Steelers ran the ball 63 times in the red zone for a total of 161 yards, scoring eight touchdowns and averaging just 2.56 yards per carry. They also accounted for two fumbles.

To get a more accurate read, however, we will focus on just Le’Veon Bell and LeGarrette Blount.

The Steelers’ two main backs accounted for 55 red zone carries in 2014, gaining 163 yards, which brings the yards per carry figure up to just under three yards per carry. But less than 30 percent of those carries gained a first down.

Only 11 of those carries gained more than four yards, while 25 of those 55 carries that did not result in a touchdown gained two yards or less. That is over 45 percent of their carries in the red zone gaining two yards or less, which is simply not very good.

When we isolate things even further and tighten up the space to within 10 yards of the goal line, we see that Bell and Blount paired for 24 carries and a combined 40 yards, averaging 1.67 yards per touch in that 10-yard window. But six of those carries resulted in touchdowns, so let’s eliminate those for now.

On their 18 carries inside the 10 that did not result in a score, the Steelers gained 17 yards. If my math is correct, that is less than one yard per carry, although Blount’s disastrous eight-yard loss skews things. Still, 17 carries for 25 yards is only so much better, even when considering the area of the field under discussion.

Much of this performance can be fairly attributed to the offensive line. If there is one specific area in which the line is most lacking collectively, it would probably be straight-ahead power off the point of attack.

We see that coming to a head the closer and closer they get to the goal line, where the big bodies in the middle of the defense stack up. Individually, none of the interior linemen in particular are graced with superior strength, and have been known to lose a handful of individual battles on those grounds. In order for the Steelers to improve in the red zone, they need to make their running game a greater threat in tight spaces by increasing their power at the point of attack along the offensive line.