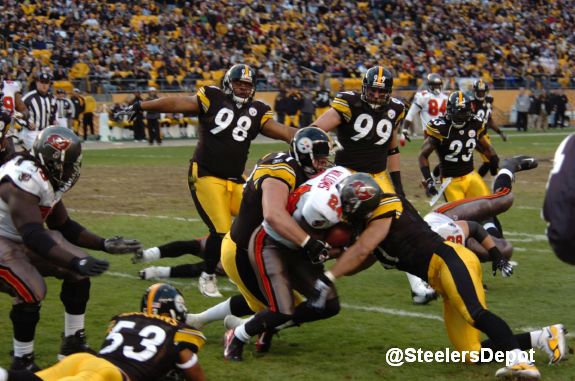 You probably know the drill by now. Steelers.com Bob Labriola has been unveiling his Modern-Era team, the best Pittsburgh Steelers from 1992 to today. His list today centers around the defensive line. We’ll post his selections with explanations with some reaction to follow.

Defensive End: Aaron Smith – “Aaron Smith gets the nod at one of the two defensive end slots, because he was a difference-maker as a run defender who also was capable of generating pressure in passing situations on third downs.”

Cam Heyward – “Heyward finished 2014 tied with Jason Worilds for the team lead in sacks, the first time a defensive lineman has been at the top of that category since Smith in 2004.”

Nose Tackle: Casey Hampton – “The Steelers’ immovable object, Hampton was a No. 1 pick in 2001 and a full-time starter at nose tackle for 164 of the 173 games that made up his 12-year career. The Steelers finished in the top three in the NFL in run defense 10 times during Hampton’s career.”

It would be blasphemous to keep Smith or Hampton off the list. Even the most argumentative Steelers’ fan surely can’t disagree with either selection. I’m all for going against the grain, but I can’t buy picking Heyward over Brett Keisel. Maybe in another five years but not as it stands today.

Heyward’s two seasons as a starter can’t compare to Keisel’s eight and currently, the stats don’t match up. Keisel has earned the honor.

Tomorrow will feature the linebackers, the best and most debatable group of any.

Agree, disagree with the list? Let us know in the comments.