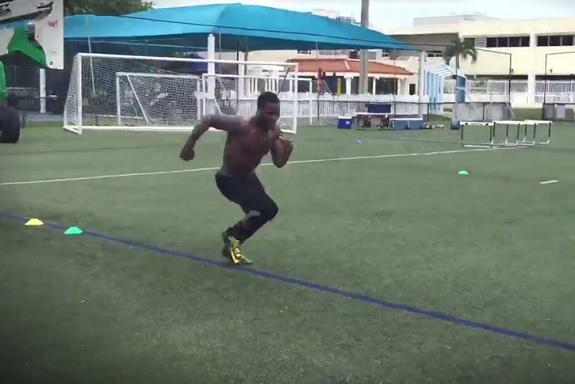 In just over one month from now, the Pittsburgh Steelers will be reporting to Latrobe for training camp. Until that time, however, players will be responsible for getting their bodies in top physical condition for the upcoming 18 practices. Several will choose to train outside of Pittsburgh and such is the case with running back Le’Veon Bell.

Bell announced Wednesday on Twitter that he is headed back to Miami to finish up his offseason training and that’s exactly where he spent most of his time working out prior to the four weeks worth of practices that just recently concluded.

Bell, who will presumably be training again at Bommarito Performance Systems in Miami, promised that he would be posting more videos of his workouts on his social media accounts during the coming weeks.

The Steelers third-year running back is now likely close to being fully recovered from the right hyperextended knee injury that he suffered in last year’s regular season finale against the Cincinnati Bengals that ultimately prevented him from playing in the playoffs and the Pro Bowl.

At some point during the next four weeks, Bell will likely be summoned to the league offices in New York to have the appeal of his three-game suspension heard. As of a few weeks ago, the former second-round draft pick still didn’t know when exactly that hearing would be taking place.

Since Bell’s marijuana transgression took place last August, he’s kept a relatively low profile as he’s still under probation. The hope is that the running back will eventually have his suspension lowered by a game being as he is a first-time offender who has now learned his lesson.

off to Miami to train! I'll see u later PA! time to put that work in! workout videos will be back in action soon! 😏 pic.twitter.com/sMgq6LzMQk