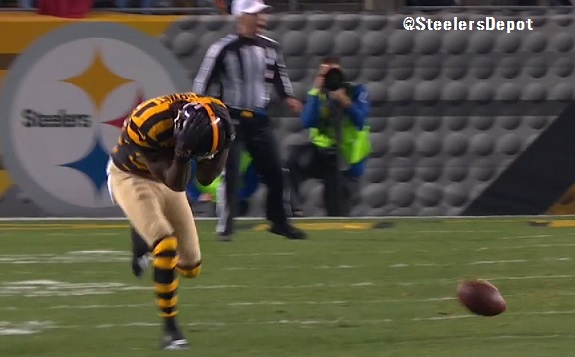 Prior to the Pittsburgh Steelers drafting him in the fourth-round of the 2014 NFL Draft out of Clemson, one of the knocks on wide receiver Martavis Bryant was his inconsistent hands that resulted in him either double-catching the football or outright dropping it. While Bryant was charged with a handful of drops during his rookie season, when you look back at them, you will see that only a few of them were really bad.

Bryant’s worst drop of his rookie season came in the game against the Indianapolis Colts and it was just an issue of him not seeing the football all of the way in before running with it, as he let it bounce right off of his chest.

The replay, however, shows us some positives with Bryant and that includes him easily gaining separation from cornerback Greg Toler.

In the very next game against the Baltimore Ravens, Bryant was likely charged with his second drop of the season as a high pass from quarterback Ben Roethlisberger went right off of his hands just prior to him being hit by the safety. While it certainly would’ve been a tough catch to make, it’s probably one that Bryant believes he should’ve made.

The very next week against the New York Jets, Bryant suffered another drop and once again, this is likely one he wished he could get back.

While stats.com only charged Bryant for three drops in 2014, Pro Football Focus had him down for four and we can only assume that the incomplete red-zone pass against the New Orleans Saints was the disputed one.

As you can see below, the back shoulder pass to Bryant does hit his hands, but even if he had caught it, it is unlikely that he would’ve came down in bounds with it thanks to the solid play made by the cornerback.

Bryant has reportedly gained 10 pounds this offseason and also worked on his hand fighting while doing some MMA training out in Los Angeles. If he can clean up his minor drop issues and route running, there’s no reason to believe that his second season won’t be a monster one.